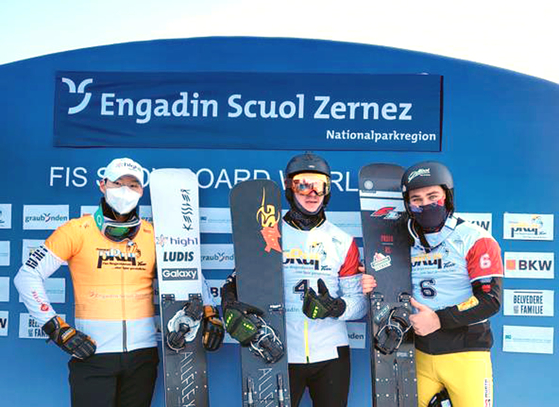 Lee Sang-ho, left, poses after winning bronze in the parallel giant slalom at the FIS Scuol World Cup in Switzerland on Saturday. [YONHAP]


Alpine snowboarder Lee Sang-ho finished in third place in the parallel giant slalom at the International Ski Federation World Cup in Scuol, Switzerland on Saturday, continuing his strong form ahead of the 2022 Beijing Olympics with his fourth medal of the season.

Lee took home bronze after finishing in third place with a time of 1.14 on Saturday, behind Dmitrii Loginov of Russia in first and Stefan Baumeister of Germany in second. He earlier finished second in the qualification round.

Lee heads to the 2022 Beijing Games hoping to repeat his success at the 2018 PyeongChang Olympics, when he became the first Asian ever to medal in alpine snowboarding with a silver in the parallel giant slalom.

Lee followed up that success with a single World Cup medal each in 2019 and 2020, before bursting back on the scene this year with a medal at every World Cup tournament to date.