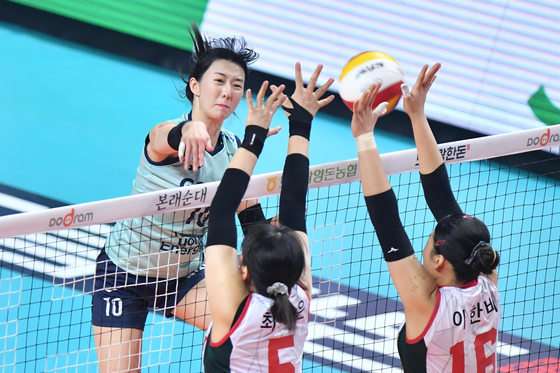 
The competition for second place in the women's V League is heating up between GS Caltex Seoul Kixx and Korea Expressway Corporation Hi-pass, while the Pepper Savings Bank AI Peppers are still struggling at the bottom of the standings.

On Sunday, the Seoul Kixx pulled off their third consecutive win, beating Pepper Savings Bank in straight sets. The Seoul club still sit in third place, but are now just two points behind the second-place Hi-pass. Suwon Hyundai Engineering & Construction Hillstate hold on to a comfortable lead, 14 points and four wins ahead of Hi-pass. Hillstate have won 20 out of 21 matches, having dropped just one match against Hi-pass on Dec. 7 last year.

While the top three clubs just keep on winning, the newest addition to the women's V League, the AI Peppers, are struggling to avoid becoming the lowest-scoring club in a single season, ever.

With Sunday's loss against GS Caltex, the AI Peppers have extended their losing streak to 16 matches, now having lost 21 out of 22 games. The least one club have ever won in a single season in the history of the league were Korea Ginseng Corporation, then-called KT&G, with three wins in the 2006-07 season. The longest losing streak was Korea Ginseng Corporation's 20 consecutive losses in the 2012-13 season.

With just 14 matches remaining, the AI Peppers desperately need a few more wins to avoid an especially embarrassing start to their K League career. That second win might not come soon, however, as their next match will be against top club Hillstate on Friday.