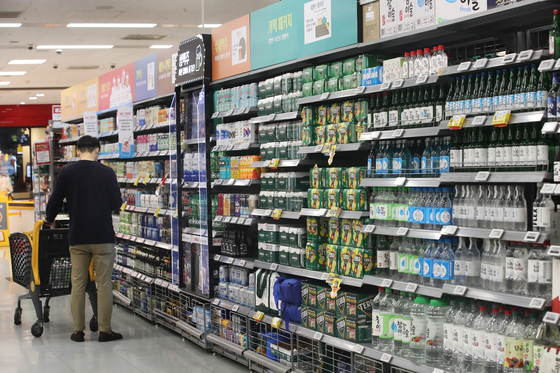 A variety of alcoholic beverages are displayed at a discount mart in Seoul. [YONHAP]

Alcoholic beverages will display the number of calories in the can, bottle or box starting this year.

On Monday, the Fair Trade Commission said it will require the information to be listed for all such drinks sold in the domestic market, including soju, makgeolli, beer and wine, even if they are imported.

In 2017, the Ministry of Food and Drug Safety issued a guideline on the labeling of nutritional information for alcoholic beverages, but the guideline was never enforced.

In February, the FTC will issue an administrative pre-announcement, which is a public notification on the changes it will make. The goal is to collect opinions, including those of the manufacturers.

After an internal review, the new labeling requirement changes under the Fair Trade Act will be immediately go into effect. The rule does not require the approval of the National Assembly.

According to the FTC, the current lack of information on alcoholic beverage containers could affect the health of consumers.

Even products with the word "Lite" need be more transparent so customers know exactly what they are getting.

The FTC said the labeling idea received support of 65 percent of respondents to a survey conducted last year.

According to a World Health Organization report released in 2018, an average Korean over 15 consumed 10.2 liters of alcohol a year. That's 62.8 percent more than the global average of 6.4 liters.

A Korea Consumer Agency report published in 2019 found 360 milliliters of soju on average has 400 calories. The most popular sojus — Chamisul, Chum-churum and Good Day — have between 397 and 408 calories.

Soju and two bottles of beer, popularly known in Korea as somaek, has about 900 calories.

But the doctor added that this does not mean that a person can't still gain weight by consuming alcohol.

"Alcoholic drinks are fundamentally high in calories, and calories consumed through sugar alcohol such as makgeolli have an even bigger impact on weight gain."

The FTC is also considering making it mandatory to include other nutrient information on the label, including sugar content, total fat and cholesterol.

Labeling of ingredients and nutritional information on alcoholic beverages became mandatory in the European Union in 2017, in a bid to keep consumers better informed as the obesity rate continues to rise.