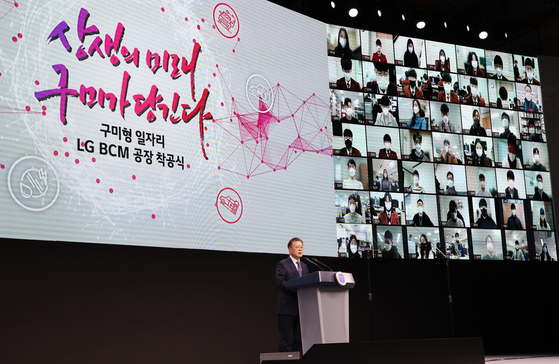 Ground was broken on a LG BCM factory in an industrial complex in Gumi, North Gyeongsang.

LG BCM -- which stands for battery core material -- is backed by LG Chem, and is meant to make key materials for the next generation of rechargeable batteries in an industrial structure that removes some costs and risks.

The first such company was Gwangju Global Motors, a joint venture among Hyundai Motor, the city of Gwangju and a Federation of Korean Trade Unions labor union. The plant opened in April 2021.

Under an agreement reached two years ago, all of the investment in LG BCM will be made by LG Chem while the governments of Gumi and North Gyeongsang Province will provide land for 50 years and tax benefits.

The union agreed to not ask for excessive raises or protest management decisions. LG BCM will be hiring 187 employees and jobs will be reserved for residents of Gumi.


The factory will be built on a 6,6116 square-meter plot and the total floor area will be 75,900 square-meter, which will make it the world’s largest single factory for cathode production.

Production is supposed to start in 2024.

Each year, LG BCM will manufacture enough cathodes, a key component in rechargeable batteries, for use in roughly 500,000 electric vehicles.

The government said it expects the supply of cathodes, which account for 40 percent of the cost of rechargeable batteries, will be boosted after the company starts production.

Korea's reliance on imports for key materials for rechargeable battery is high.

The factory will build ties with local high schools and universities including the Kumoh National Institute of Technology.

“The Gumi plant is a good example of a regional government, and company coexisting at a time when the global supply network is in crisis,” said President Moon Jae-in, who attended the groundbreaking ceremony Tuesday.

The new industrial structure took off in 2019 and is meant to decant industrial jobs away from Seoul and the surrounding Gyeonggi province.

Gumi's industry has been shrinking as companies relocated to the Seoul metropolitan area or went abroad.

There are four other places where similar models are being pursued: Miryang in South Gyeongsang, Hoengseong in Gangwon, Gunsan in North Jeolla and Busan.

The government estimates that through such regional job projects, some 4,000 direct jobs can be created and roughly 2.3 trillion won in investment be made.