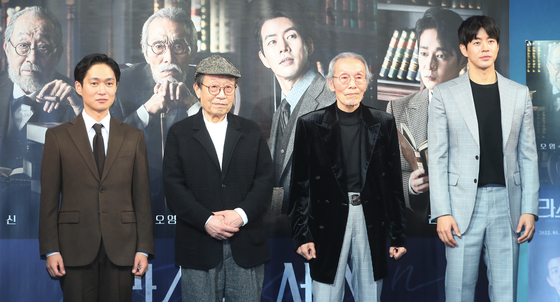 Oh Young-su, third from the left, poses with other actors who appear in the play "Last Session" during a press conference on Friday at Yes24 Stage in Jongno District, central Seoul. [ILGAN SPORTS]


Ticket sales surged for the play “Last Session” starring Oh Young-su, a star in the hit Netflix series "Squid Game," after the actor nabbed a Golden Globe award on Monday.

“Our ticket sales have been relatively high, but after Oh won the award, tickets for all 11 performances that have been slated for this month sold out,” said Park Jeong-mi, CEO of the play’s production company Park Company. “Also, Oh’s performances for next month are nearly sold out as well.”


“Last Session” which opened Friday at TOM Theater’s Hall 1 in Daehangno, central Seoul, is a 85-minute play comprised of just two characters — Sigmund Freud and C.S. Lewis — in a pedantic debate about the existence of God and the meaning of life.

“Last Session” is based on "Freud's Last Session," an American play written by Mark St. Germain that was first performed on stage in 2009.

In the Korean production of the play, Oh plays the role of the Austrian psychotherapist Sigmund Freud.

The production also stars 86-year-old actor Shin Gu as Freud and actors Lee Sang-yun, 40, and Jeon Park-chan, 39, in the role of Lewis.

When asked about his decision to act in “Last Session,” Oh told reporters that he wanted to stay focused on his main occupation of acting on stage.

“I was worried that I would lose headway as an actor amid the sudden rush of fame,” said Oh. “So I decided to take on this new role to stay focused on acting. As an actor, acting is my life’s goal and meaning.”

Oh’s colleagues in “Last Session” describe him as a man who is “focused on the basics.”

“Oh never takes the fundamentals of acting lightly,” said Lee in an interview with the JoongAng Ilbo. “He also taught me how to incorporate a character’s life into acting.”

“Last Session” is in theaters through March 6. According to the current social distancing guidelines, only fully vaccinated people and those who submit a negative Covid-19 PCR test taken within 48 hours are allowed into the theater.

Oh majored in theater at Dongguk University and debuted as an actor in 1963. The actor debuted on the silver screen in 1965's “The Seashore Village” and was also in director Kim Ki-duk’s “Spring, Summer, Fall, Winter... and Spring” (2003). He was largely known for his theater work until he was cast as player No. 1, also known as Oh Il-nam in “Squid Game.” Oh has been in some 200 plays.