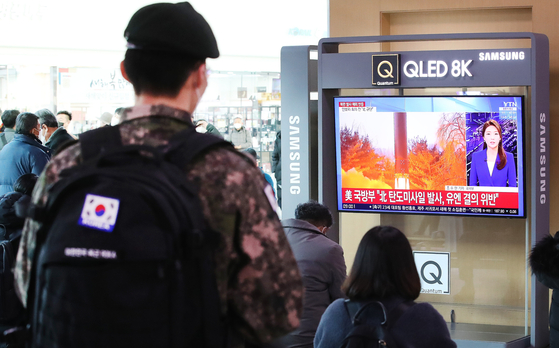 
North Korea fired a suspected ballistic missile into the East Sea on Tuesday morning, South Korea's Joint Chiefs of Staff (JCS) said, the second such launch in less than a week.

The JCS said in a statement it detected the launch of a projectile from North Korea's "inland area" at 7:27 a.m. toward the sea off its east coast.

It added that South Korean and U.S. intelligence authorities are in the process of conducting a detailed analysis of the launch, without immediately releasing further details.

"Currently, the South Korean military in cooperation with the United States is closely monitoring related military movements and maintaining a firm readiness posture," said the JCS.

The North's latest missile launch comes six days after the launch of a ballistic missile off its east coast, which Pyongyang claimed was hypersonic. It marks the second missile test this year.

The United States and five other countries issued a joint statement ahead of the meeting condemning last week's missile launch and calling on the 15-member Security Council to stand united against North Korea's "ongoing, destabilizing and unlawful actions."

The countries said North Korea "must choose dialogue and peace over its unlawful and threatening weapons program."