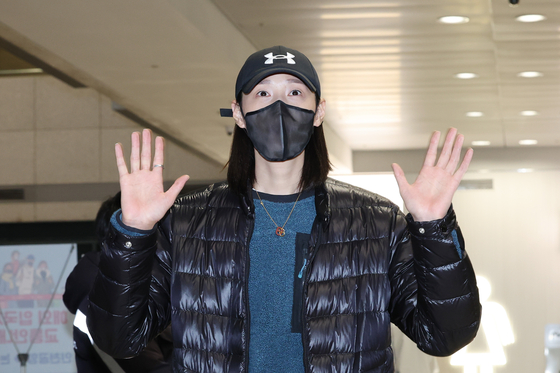 Kim Yeon-koung poses for a picture at Incheon International Airport on Monday after arriving from China. [YONHAP]

Kim is now a free agent, but will not be able to play in Korea because the V League registration for the season closed on Dec. 28.

Turkish club Fenerbahce, where Kim played from 2011 to 2017, are also reportedly looking for ways to recruit Kim. If that move worked out, Kim would be the second Korean star currently active in the organization, with center back Kim Min-jae currently playing for the connected football team.

Kim has been through a turbulent season in China because of a sudden rule change ahead of the start of the season. The new rule limited the maximum number of foreign players playing at a time to one per team, instead of two. As the top two players on the Shanghai squad were Kim and Jordan Larson of the United States, who was named MVP at the Tokyo Olympics, the rule worked against the players and the club.

The Shanghai club finished in third place winning the second leg of the bronze medal match against Liaoning Huajun on Jan. 4 in straight sets. Kim scored 20 points alone in the match on Jan.4 after scoring 21 points, the most points in the match, in the first leg on Jan.3.

Kim, who had returned to Korea in 2020 to play for the Incheon Heungkuk Life Pink Spiders in the 2020-21 V League season after 11 years playing in Japan, China and Turkey, decided to rejoin Shanghai Bright Ubest for the 2021-2022 season. She returned to the Chinese club four years after she led it to the top of the Chinese Super League in the 2017-18 season to snap a 17-year drought. Ubest finished runner-up in the championship that year.

As one of the reasons Kim chose the Shanghai club had been because of the shorter season, Kim, who is now 33-years-old, may just opt to rest for the foreseeable future. Before Kim joined the Shanghai club, the 2020-21 V League season was a restless one for Kim as she played in a total of 41 games, including the KOVO Cup, all regular season games and the championship playoffs.

Right after the season ended, Kim joined the national volleyball team to train for the 2021 FIVB Volleyball Women's Nations League then went straight to Tokyo to compete at the Olympic Games.