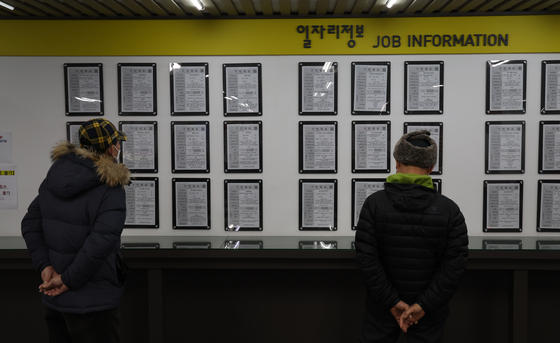 Visitors looking for job openings on a bulletin board at a job center in Seoul earlier this month. [YONHAP]

That was the biggest increase in jobs in seven years.

Record-breaking exports helped create jobs, but the Covid-19 pandemic costs jobs in wholesale, retails and the restaurant and hotel businesses.

In 2020, there were 1.1 million people looking for jobs, the largest number of unemployed Koreans in nearly two decades.

The construction industry saw an increase of 74,000 or 3.7 percent.

The impact of Covid-19 on self-employed people, mainly owners of small restaurants and coffee shops, was somewhat less than in 2020.

That indicates that store owners had to let employees go.


This was in contrast to salaried employees and contract employees, which grew 2.5 percent and 3.4 percent respectively compared to 2020.

Manufacturing, which accounts for 16 percent of Korea's jobs, say a 0.2 percent year-on-year decline, or 8,000 fewer.

Manufacturing was helped by record-breaking exports.

Young people and elderly continued to lead in finding jobs.

For people in their 30s and 40s, jobs became scarcer.

Finance Minister Hong Nam-ki on Thursday emphasized the positive news in the report and stressed that jobs increased in the private sector.

“Last year there were 370,000 more jobs, which is 100.2 percent of the pre-Covid-19 figure,” Hong said. “The job recovery was led by the private sector with jobs in manufacturing increasing for two consecutive months.”