Smoking in the back gets a Lotteria in trouble

Smoking in the back gets a Lotteria in trouble 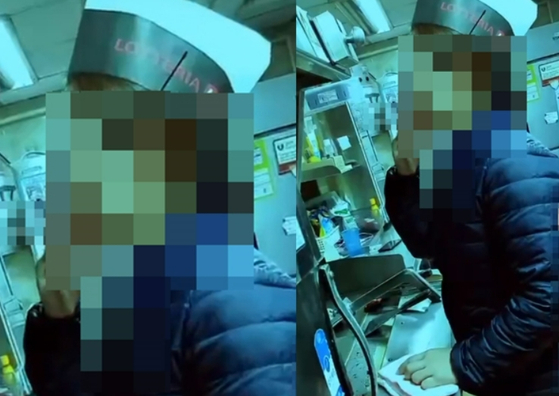 A screen grab from a now-deleted video uploaded on TikTok of a Lotteria part-time worker smoking in a kitchen. [YONHAP]


A video of a Lotteria kitchen worker smoking on duty was uploaded on TikTok, causing an uproar online.

On Tuesday night, a seven-second video of a part-time worker smoking a cigarette was uploaded to TikTok. The employee, wearing a cap with a Lotteria logo, was wiping a kitchen counter with a piece of cloth while blowing cigarette smoke into the air.

The video was deleted later, but the damage had been done.

Lotte GRS, which runs Lotteria, confirmed Wednesday that the store featured in the video was one of its franchises.

According to the company, two part-time workers who finished their night shift stayed in the kitchen and filmed the video. Both were fired.

The Lotteria branch was closed on Wednesday and given a food hygiene inspection. All employees of the branch were given additional training on Wednesday.

Lotte GRS said the branch may continue to be closed for few more days if necessary.

The Ministry of Food and Drug Safety asked the Yeongdeok County Office in North Gyeongsang, where the branch is located, to conduct its own inspection of the branch.

This was not the first time videos on social media hurt fast food companies. A video of a Hosigi Chicken part-time worker vaping in a kitchen was uploaded on TikTok last month. He was filmed vaping while preparing fried chicken.

The chicken franchise apologized, and temporarily shut the branch.