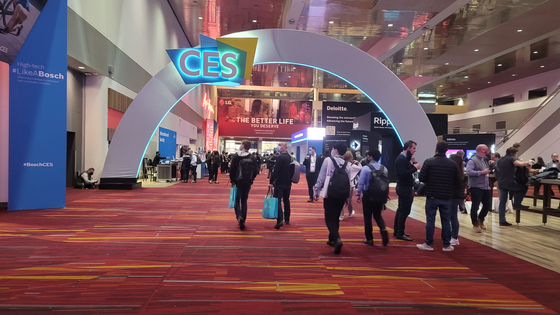 
Dozens of Koreans attending CES 2022 tested positive for Covid-19 while in Las Vegas for the event, according to the Korea Disease Control and Prevention Agency on Wednesday.

The trade show, which ran from Jan. 5 through Jan. 7, was held in person after two years of being held online. All attendees were required to the show proof of vaccination, but attendees were not required to take tests during the event (though test kits were provided).

An estimated 70 Koreans were found to be infected in tests administered before returning home. The total number attending the event is not known, though it was probably in the hundreds.

About 20 employees of Samsung Electronics tested positive, the company said. They were repatriated to Korea by private plane, with most of them returning to Korea on the jet Tuesday.

Attendees from Hyundai Motor and Hyundai Mobis, which owns 21.4 percent of the carmaker, tested positive, according to a spokesperson for Hyundai Motor.

"There are multiple cases among CES participants," the spokesperson said, "Most of them are either asymptomatic or have light symptoms."

Six employees from Hyundai Heavy Industries were put into quarantine in Las Vegas after testing positive there.

"Six to seven employees tested positive," the spokesperson said, "We have advised that all CES attendees should work from home regardless of test results."

At least four Korean reporters tested positive after they arrived in Korea following the CES coverage.

A total of 45,000 attendees participated in person at the show, including 1800 members of the press, according to the Consumer Technology Association (CTA), the vent's organizer.