[INTERVIEW] Motional is dispatching robotaxis to a city near you

[INTERVIEW] Motional is dispatching robotaxis to a city near you 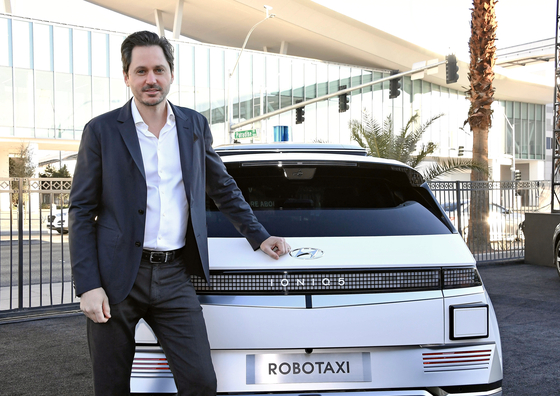 Karl Iagnemma, President and CEO of Motional, poses with Ioniq 5-based robotaxi on Jan. 6 at CES 2022 in Las Vegas. [HYUNDAI MOTOR]


A robotaxi, a fully driver-less taxi, sounds like sci-fi. In fact, robotaxis will hit the road for food delivery in the United States this year.

They will be run by Motional, a $4 billion joint venture between Hyundai Motor and automotive parts company Aptiv. The company is set to supply Ioniq 5 robotaxis to Uber Eats for deliveries in Santa Monica, California, this year. Motional forged a partnership with Uber Technologies last year.

Karl Iagnemma, President and CEO of Motional, discussed the company’s vision for autonomous deliveries and his response to skepticism about them in an interview last week.

Robotaxi food deliveries are just the beginning of a widening deployment of driverless cars, he said, and he envisioned ride-hailing services based on robotaxis as soon as next year.

Q. Motional has announced plans for robotaxi-based delivery service. Could you share more?

Autonomous delivery presents a significant new market opportunity for Motional. In the U.S., demand for food delivery has doubled since the start of the pandemic and the use of mobile food delivery apps was up 20 percent in 2021.

With Motional's entry into food delivery, we're also evolving to a dual-purpose product strategy, where we will alternate between transporting passengers for ride-hailing services and autonomous deliveries. This will enable us to maximize the time our robotaxis are on the road operating a revenue-generating service.


People are anticipating competition in the autonomous driving service market especially in the U.S. What are the technological and business strengths of Motional?

Since the founding of Motional in 2020, we've distinguished ourselves as an industry leader both technically and commercially. Furthermore, our heritage and strategic partnerships with Hyundai Motor Group and Aptiv uniquely position Motional for success. We have the software and hardware expertise needed to develop a fully integrated driverless vehicle that can be manufactured on a global scale.

Technically, there are only a handful of industry leaders with the advanced technology needed to operate fully driverless vehicles on public roads and Motional is one of them. We began fully driverless testing in early 2021 and will be launching a fully driverless public robotaxi service starting in 2023. That service will launch in Las Vegas before expanding to other markets globally.

Commercially, Motional leads the industry as the robotaxi fleet provider of choice for the ride-hailing industry. We're the only one in our industry to have partnerships with Lyft, Via and Uber Eats. Partnerships with these global on-demand networks are critical to scaling driverless technology. Motional is well positioned to reach millions of customers through its ride-hailing and delivery services.

Some people are skeptical about the future of autonomous driving technology due to delays in technological development.


Ten years ago this industry didn't exist, and up until a few years ago, people were still questioning the viability of the technology. Now, there's no question that this is possible.

There are self-driving robotaxis moving real passengers every day across the world, and, as I mentioned before, several industry leaders, Motional included, have demonstrated fully driverless operations. We've proven the technology is possible and now the conversation has to turn to scale. In order to scale, you need to have a cost optimized product. This is where Motional's partnership with a global leader in vehicle manufacturing, Hyundai, is key. We've developed the Ioniq 5 robotaxi to be safe and reliable, but also cost-optimized for global production. This is critical for wide commercialization.


Development of autonomous technology is one thing and actual adoption of the technology by people is another. Some people might be reluctant to get into autonomous driving vehicles.

Consumer adoption is incredibly important for scaling driverless technology and it's an area where Motional excels. We've been operating a commercial robotaxi service in Las Vegas for over four years and have already introduced hundreds of thousands of consumers to driverless technology, with 98 percent of those riders awarding their ride a five-star rating.

This level of experience is unparalleled in our industry and is a key competitive advantage. The service has provided invaluable lessons, including what it takes to offer a successful robotaxi ride and convert users into repeat riders. Along with providing ratings, passengers were asked to provide feedback after their rides. What we learned, which may be surprising to some, is that there was much less of a focus on the technology than you might expect. Riders were more concerned with typical ride-hailing concerns such as adequate trunk space for luggage. This feedback emphasized that operating a commercial robotaxi service encompasses far more than driverless technology -- it's about the entire end-to-end passenger experience.

We've been able to incorporate these lessons into the development of the Ioniq 5 robotaxi. The vehicle is equipped with a suite of rider "touchpoints" that will allow a passenger to autonomously interact with the robotaxi throughout their ride. For example, a rider will be able to control parts of their journey, such as stopping and starting a ride, through controls on their mobile application, or through displays on the interior of the vehicle and easily accessible buttons.

As we commercially deploy our systems in various cities, the vehicles could face any number of complex or unusual scenarios that human drivers also face. While our extensive testing and advanced machine learning systems help train our vehicles for these cases, there will still be certain scenarios that our vehicles haven't been trained for.

When that happens, we're able to deploy Remote Vehicle Assistance (RVA). With RVA, a remote operator can instantly connect to the vehicle, direct it to a new path or provide other assistance. We also use Artificial Intelligence (AI) within our RVA control center to automatically provide remote operators with recommended solutions for certain situations, such as crossing a double line to get around a construction area. RVA supports our commercial deployments and allows us to scale our technology much faster.