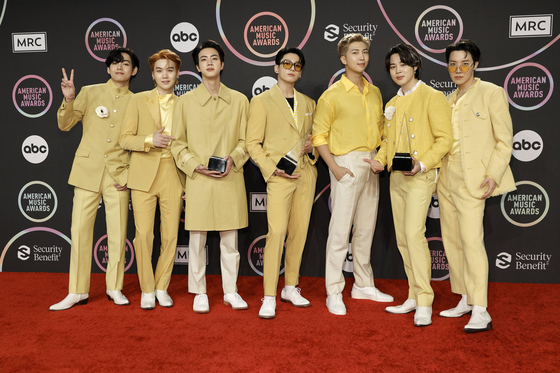 From left, Jin, Suga, V, Jungkook, RM, Jimin, and J-Hope of BTS, winners of the Favorite Pop Song, Favorite Pop Duo or Group, and Artist of the Year awards, pose in the press room during the 2021 American Music Awards at Microsoft Theater on November 21, 2021 in Los Angeles, California. [YONHAP]


HYBE, the entertainment powerhouse behind boy band BTS, released more details on Wednesday of its upcoming webtoons and webnovels.

Three of HYBE’s original stories will be released first. They are “7Fates: Chakho,” which features BTS, “The Star Seekers” with Tomorrow X Together (TXT) and “Dark Moon: the Blood Alter,” featuring Enhypen. BTS’s urban fantasy “7Fates: Chakho” will be released first on Jan. 15, followed by vampire romance “Dark Moon: the Blood Alter” on Jan. 16. TXT’s “The Star Seekers” will be up next on Jan. 17.

The three webtoons and webnovels will be updated every week in 10 different languages. The English versions will be available through webtoons.com/en/.

Last November, HYBE announced that it will expand its IP, or intellectual property, with “original stories” via Naver Webtoon. It also announced that a new BTS online game will be released early this year on Weverse. The game will be about the seven members of BTS and their interactions with fans in a virtual world.

“Fans will be able to discover new charms of the artists through the characters they express in the new webtoon and webnovels,” stated an official from HYBE. “We hope to provide fans with more diverse content so they can enjoy K-pop artists in different dimensions.”

Boy band 2AM collabs with Kakao Webtoon for new song