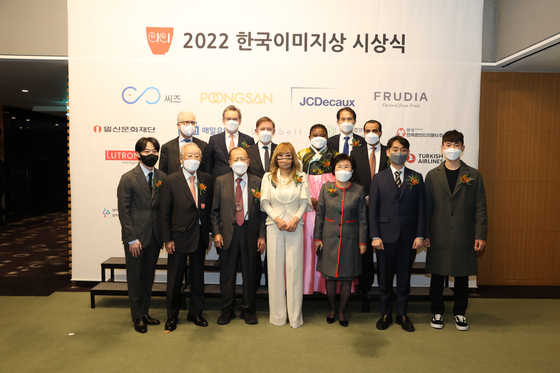 Director Hwang was selected for "his original script and directing full of creative plot, which led 'Squid Game' to become an international sensation and become a stepping stone for promoting Korean culture to the world and establishing Korea as a cultural content superpower." He was unable to attend and delivered his acceptance speech via a video message.

"When I first created ‘Squid Game,’ I wanted to create a story that people from all around the world could empathize with, rather than promote Korea and our culture," Hwang said in the video. "I was so surprised that so many people from different cultures have enjoyed Squid Game despite the language barrier, and it has become content that introduces Korean culture [...] In my future works, I will always think of more than just what I want individually and take more care and think about how a piece can become the face of a country. I will continue creating works with the mindset that I am a cultural envoy. Thank you again to everyone who loved 'Squid Game.'"

The award to Netflix was handed to Vice President Kang Dong-han of Netflix Korea. CICI thanked Netflix for "discovering excellent Korean content such as 'Squid Game' and spreading it to the world."

Soprano Jo is one of the most famous Korean opera singers with a career spanning more than three decades. The award was in recognition of her "consistent contributions to enhancing the image of Korea on international opera stages over the past 35 years."

Prior to the award ceremony, Jo, Kim, Kang and CICI's president Choi Jung-wha sat down for a press conference.

"We saw incredible results with Korean content last year," said Kang. "It was an inspiring and honorable year. We try to produce something that can satisfy the standards of Korean audiences, and I think that's also the reason we've been able to captivate foreign audiences as well. [Last year] showed proof that Korean content can be loved all around the world."

Kang added that while 2021 saw many popular series such as "Hellbound," "My Name" and "The Silent Sea," this year Netflix Korea will also release more original films and entertainment shows such as "Single's Inferno" (2021-22).

"I am not always confident in my life, but the moment I get up on stage, all my worries and other thoughts disappear," said Jo. "I am so focused on my mission to spread peace as an artist, and it makes me automatically focus solely on music when I'm on stage."

The soprano, who recently gave a performance with an artificial intelligence pianist, added that the Covid-19 pandemic helped her realize the importance of technology to stay connected with audiences.

Kim shared that he is currently preparing for the 2022 Asian Games and aims to make it on Team Korea again.

"It's always been a dream of mine to compete at the Asian Games," said the archer. "My goal as of now is to participate in the Games. After that, I will not miss out on any gold medals, especially for men's team."

CICI has been annually hosting the Korea Image Awards since 2005, acknowledging individuals who have contributed to promoting Korea to the world.