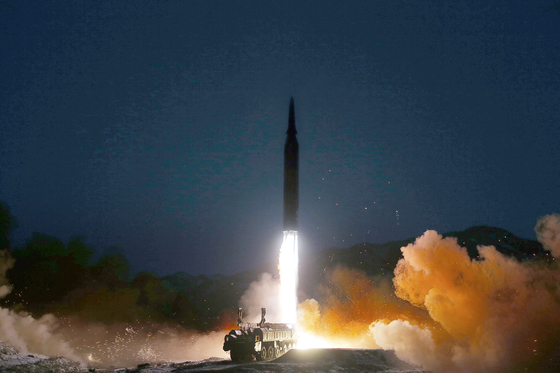 North Korea said it successfully conducted a "final" test of a new hypersonic glide vehicle under the watch of leader Kim Jong-un, his first attendance of a launch in nearly two years.

The test Tuesday morning was "aimed at the final verification of overall technical specifications of the developed hypersonic weapon system," reported the North's official Rodong Sinmun and the Korean Central News Agency (KCNA) on Wednesday.

After its release from a missile, the hypersonic vehicle made a "glide jump flight" from 600 kilometers, followed by 240 kilometers of "corkscrew maneuvering" before "hitting the set target" in waters 1,000 kilometers away, according to KCNA, a longer range than estimated by South Korea's military a day earlier.

This was the first time Kim personally supervised a missile launch in 661 days. He last observed the launch of a pair of KN-24 short-range ballistic missiles from Sonchon in North Pyongan Province on March 21, 2020. Kim appeared to have avoided personally supervising weapons tests during denuclearization diplomacy with the United States, despite an impasse in negotiations since 2019.

Kim, wearing a black leather trench coat, watched the launch by the Academy of National Defense Science, involved with the North's missile program, with officials including Jo Yong-won, a member of the presidium of the ruling Worker's Party's Political Bureau. His younger sister Kim Yo-jong also attended, as seen in photographs, although her name was not mentioned in state media reports.

South Korea's Joint Chief of Staff (JCS) said Tuesday that North Korea fired a missile at around 7:27 a.m. from Jagang Province into the East Sea, which flew over 700 kilometers at a maximum altitude of 60 kilometers and a top speed of Mach 10, or 10 times the speed of sound.

This marked the North's second hypersonic missile launch in less than a week.

KCNA reported that the "maneuverability of the hypersonic glide vehicle was more strikingly verified through the final test-fire."

Hypersonic missiles reach speeds greater than Mach 5, which is five times the speed of sound. These types of missiles were developed to avoid interception, and only a few countries have them, such as the United States, Russia and China.

After the launch, Kim praised missile research scientists, technicians and officials for "a great success in the field of developing hypersonic weapon which is of the most important strategic significance in the five core tasks of the five-year plan."

He stressed the need to "further accelerate the efforts to steadily build up the country's strategic military muscle both in quality and quantity and further modernize the army."

Kim "warmly congratulated" the core members of the hypersonic weapon research and development team at the Central Committee building, taking photographs with them. He said he expected them to "bolster the war deterrent of the country with their continued ultra-modern scientific research achievements" and help "guarantee the sovereignty and security of the state." 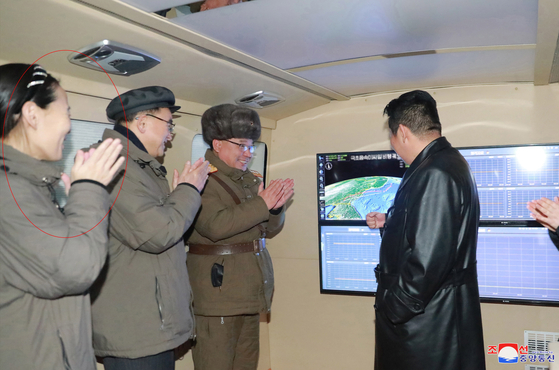 North Korean leader Kim Jong-un, right, observes a successful test-fire of a hypersonic glide vehicle on four monitors Tuesday, in a photo released by the state-run KCNA Wednesday. He is accompanied by his younger sister Kim Yo-jong, far left. [KCNA]


Coinciding with the North's latest missile launch, the U.S. Federal Aviation Administration (FAA) grounded airline flights at major airports on the West Coast for 15 minutes. While there were no major delays reported by airlines, there was brief confusion amongst pilots and air traffic controllers.

"While we've assessed that this event did not pose an immediate threat to U.S. personnel or territory or to our allies, the launch highlights the destabilizing impact of the DPRK's illicit weapons program," White House Press Secretary Jen Psaki told reporters on Air Force One en route to Atlanta. "It poses a threat to the DPRK's neighbors in the international community."

She referred to the acronym for the North's official name, the Democratic People's Republic of Korea.

Psaki urged the North to "refrain from further provocations and engage in sustained and substantive dialogue."

She noted that the FAA's grounding of flights was "out of an abundance of caution, and they were going to be assessing their approach moving forward."

The FAA said in a statement. "As a matter of precaution, the FAA temporarily paused departures at some airports along the West Coast on Monday evening. Full operations resumed in less than 15 minutes."

It added that the FAA "regularly takes precautionary measures" and will be "reviewing the process around this ground stop."

On Jan. 5, North Korea launched what it claimed was a high-tech hypersonic missile from Jagang Province, bordering China. It was its first weapons test this year.

Last Friday, the South Korean Defense Ministry assessed that North Korea had exaggerated its capabilities and said that the missile, which had a top speed of Mach 6, was not a hypersonic glide weapon.