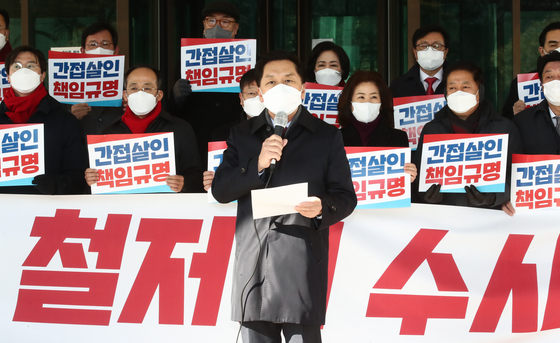 This is the third death of someone related to allegations surrounding the presidential candidate.

The Yangcheon District police found the whistleblower, a man surnamed Lee, at around 8:40 p.m. Tuesday after Lee’s family filed a missing-person report after they lost contact with Lee on Jan. 8. The police conducted an autopsy and are currently investigating the case. No note was found.

Lee, a lawyer known to be a supporter of President Moon Jae-in and a member of the democratic party for over a decade, submitted a recording to a civic group last year as proof that the candidate paid the legal fees for his trial that acquitted him in 2020 by proxy. The recording revealed that another lawyer surnamed Lee, who defended the DP candidate in trials when he was accused of violating the Public Official Election Act in 2018, was given 300 million won ($252,000) in cash and 2 billion won worth of stocks in a listed company.

Before the recording was released, the candidate had said he spent around 250 million won in legal fees for 14 lawyers in total. The civic group, after receiving the recording, filed a report to the prosecutors’ office in October accusing the candidate of spreading of false information. The candidate also countersued the whistleblower for making false accusations.

The whistleblower had posted online about two recent deaths that many speculate were connected to the DP candidate.

On his Facebook on Dec. 10, when Yoo Han-gi, head of Pocheon Urban Corp. and former division manager of the Seongnam Development Corporation at the time of the controversial Daejang-dong project's launching in 2015, was found dead, the whitsleblower wrote, “Although my life is ruined, I don’t have any intention to commit a suicide, until I see my son and daughter get married.”

Again on Dec. 22, a day after Kim Moon-gi, head of the development division at Seongnam Development Corporation, was found dead in his office, the whistleblower posted that many who were on the frontlines fighting against the candidate checked up on one another in the morning to check whether they were still alive.

Presidential candidate Lee said he “is sorry for [Lee's] death and sends his condolences,” after holding a discussion with CEOs of 10 major companies in Korea at the Korea Enterprises Federation in Mapo District, western Seoul, on Wednesday. Prior to his comment, the DP election campaign committee issued a statement saying that the candidate has no relation to the deceased.

Other opposition party lawmakers spoke up. Lee Jun-seok, head of the People Power Party (PPP), wrote, “Let’s watch and get mad” on his Facebook. Rep. Hong Joon-pyo of the PPP also said, “This is a very mysterious chain of coincidences, as another major witness to a case related to presidential candidate Lee died, whether it was a suicide or a homicide.

"A thorough investigation will be necessary to find out whether this isn’t just a serial killing by punks that you only see in TV dramas or movies," he said.

Lawmakers from the PPP have been demanding an independent counsel probe into the Daejang-dong land development scandal, in which, the PPP argues, presidential candidate Lee is involved from when he served as Seongnam mayor.