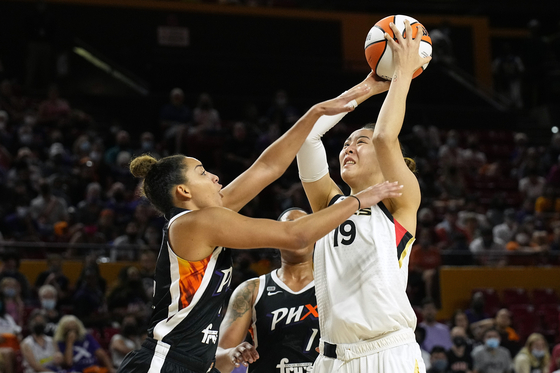 Park became a restricted free agent in the WNBA at the end of the season in October, when the Aces dropped out of the best-of-five semifinals 3-2. If Park accepts the qualifying offer, she will head to the United States after the Women's Korean Basketball League (WKBL) finishes in March. The qualifying offer is a standing offer for a one-year deal and will only become a regular contract if Park decides to sign it.

Park is one of the few players ever to have concurrent careers in both Korea and the United States. Park was first drafted into the WNBA when she was only 19-years-old and has played for the Aces in 2018 and 2019, missing out on 2020 due to injury, and was called back in 2021.

Park is currently in the middle of the WKBL season, where she also plays for the Cheongju KB Stars during the WNBA offseason. The WKBL season started on Oct. 24 and the KB Stars are dominating the season with 19 wins and one loss as of press time.

As a restricted free agent, Park could sign a deal with any team, but the Aces can retain Park by matching the terms of that offer because the Aces have the right of first refusal. Park could sign the one-year deal or wait to hear offers from other teams before signing as contract negotiations will begin on Jan. 15.