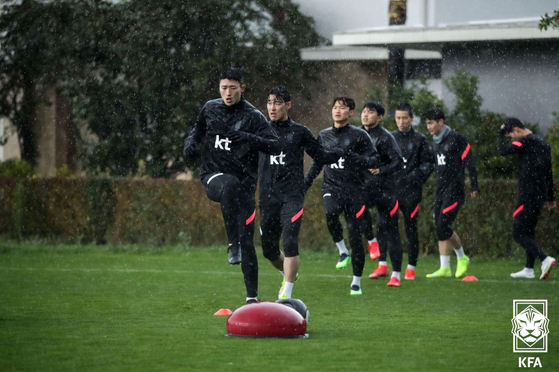 
Tottenham Hotspur manager Antonio Conte confirmed Tuesday that Son Heung-min is expected to be out with a muscle injury until after the international break, seemingly implying that the Korean national team captain will not be available for two World Cup qualifiers at the end of the month.

"The update on Sonny, for sure, we will have to wait until after the January international break," Conte said. "It’s a muscular problem."

The Spurs manager admitted to being confused by Son's injury, which appeared to come out of nowhere one day after a game against Chelsea on Jan. 5.

"I repeat, it was strange because he came off during the game with no problem, but the day after he felt a bit of pain, and he was injured," Conte said. "It’s a pity because you know very well the importance of this player for us."

Son was substituted off in the second half of Spurs 2-0 loss to Chelsea in the first leg of a Carabao Cup semifinal on Jan. 5. He wasn't an injury concern at the time, Conte confirmed, but started to struggle the following day.

Son's departure comes as a blow to both Tottenham and Korea. Spurs performed fine without the forward in their 3-1 FA Cup win over third-tier club Morecambe on Sunday, but with the second leg looming of the Carabao Cup semifinals still to come on Wednesday as of press time, Son's absence will have been keenly felt.

Spurs still have three difficult Premier League games to play before the international break — against Arsenal on Jan, 16, Leicester on Jan. 19 and Chelsea on Jan. 23.

The mystery surrounding Son's unidentified muscle injury adds to the uncertainty about his availability for the international break, when Korea will play two qualifiers for the 2022 Qatar World cup, against Lebanon on Jan. 27 and Syria on Feb. 1.

Under FIFA rules, a club is required to release players for any international fixture scheduled during a recognized international break. However, if the player is injured, they obviously are not required to play.

In practice, this means that if a player has been out of action for their club for a series of games running up to an international break, the club's medical staff are extremely unlikely to suddenly give the all clear in time to benefit the country but not the club. Unsurprisingly, if Son misses five games in January due to muscle injury, Spurs are not likely to clear him for international duty.

"Annexe 1" of FIFA's "Regulations on the status and transfer of players" does allow the club to challenge the injury — "A player who due to injury or illness is unable to comply with a call-up ... shall, if the association so requires, agree to undergo a medical examination by a doctor of that association’s choice" — although a second opinion is unlikely to change the injury decision.

As well as Son, Korea's only other Premier League player, Wolverhampton Wanderers' Hwang Hee-chan, is also out with an injury.

It appeared from replays of the incident that Hwang's toe may have got stuck in the ground, causing a brief hyperextension, likely leading to a hamstring injury. It wasn't until two weeks later that Wolves gave an update on Hwang's status, announcing that he had sustained a hamstring injury and would be out of action until February.