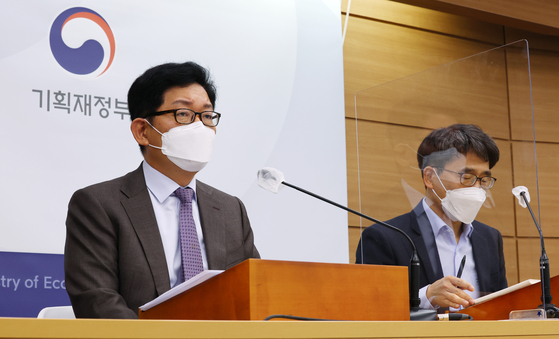 Ko Kwang-hyo, the Finance Ministry's tax and custom official, give a briefing on taxes collected in the first 11 months of 2021 at the government office in Sejong on Thursday.[YONHAP]

Tax revenue in the first 11 months of 2021 exceeded estimates, setting the stage for the first supplementary budget of the new year as social distancing restrictions continue to affect small businesses.

According to the Finance Ministry on Thursday, through November, the government collected 323.4 trillion won in taxes. It had originally forecast 314.3 trillion in taxes for all of 2021.

"Despite the spread of Covid-19, including Omicron, Korea's strong economic recovery is expected to exceed expectations," said Ko Kwang-hyo, a tax and custom official at the Finance Ministry citing record-breaking trade and an improving employment picture.

President Moon Jae-in ordered the government to come up with measures to utilize the surplus taxes in support of small shop owners and self-employed struggling under extended restrictions, according to the Blue House on Thursday.

"It is fortunate that we now have room to support small shop owners and self-employed," Moon said.

The Democratic Party led by its presidential candidate Lee Jae-myung has been demanding another supplementary budget as the government was able to collect more taxes than expected. The DP has argued that the additional taxes would allow for the support without the need to issue bonds.

Despite criticism that the DP is trying to win favor of the public ahead of the March presidential race, the ruling party has been pushing for the extra budget to be created before the Lunar New Year holidays.

It would be Korea's seventh supplementary budget since the Covid-19 outbreak started in 2020.

Tax revenue was up across the board, including income and corporate taxes.

Income taxes collected through November totaled 106.6 trillion won, which is 20 trillion won more than in the year-earlier period. The government said the stronger job market helped.

Spending increased along with revenue.

Due to support for small businesses affected by Covid-19 and the vulnerable, spending in the first 11 months was 546.3 trillion won, up 45 trillion won on year.

The fiscal deficit was 22.4 trillion won, down from 63.3 trillion won in the same period a year earlier.