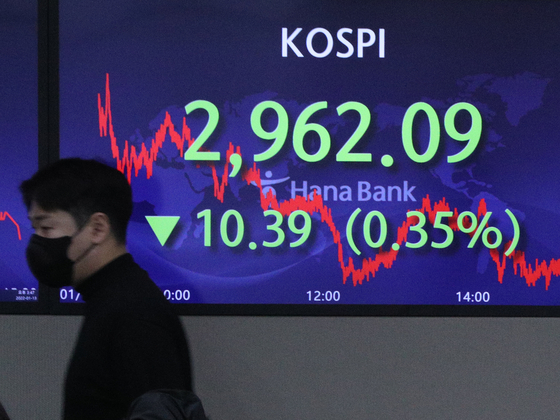 A screen in Hana Bank's trading room in central Seoul shows the Kospi closing at 2,962.09 points on Thursday, down 10.39 points, or 0.35 percent, from the previous trading day. [NEWS1]


Stocks retreated after a two-day rise Thursday as investors worried that rising inflation in the United States could hasten the Federal Reserve's tapering moves. The won rose against the dollar.


Stocks got off to a muted start as the U.S. consumer price index increased 7 percent in December, the highest on-year jump in almost four decades.


"The latest keyword in the market is the pace of the Fed's tapering and rate hikes," Eugene Investment & Securities analyst Huh Jae-hwan said.


"Investors are not buying into a radical pace of tapering, but the high inflation rates will need some time to cool. Stocks lacked momentum for additional gains," he said.


LG Electronics surged 6.2 percent to 145,500 won after reports that it will supply an infotainment system to Mercedes-Benz's EQS model.


The local currency closed at 1,187.5 won against the U.S. dollar, down 3 won from the previous session's close.