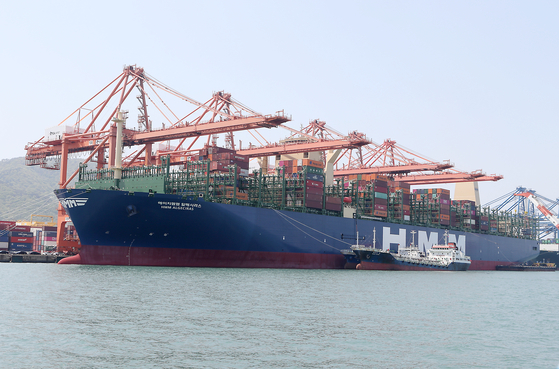 A container ship built by Daewoo Shipbuilding and Marine Engineering docked at a port in Busan in 2020. [YONHAP]

The acquisition of Daewoo Shipbuilding Marine and Engineering (DSME) by Hyundai Heavy Industries fell apart as the European Union vetoed the merger of the two Korean shipbuilders, noting especially potential for domination in LNG vessel manufacturing.


"The merger would have created a dominant position in the market for the construction of large LNG carriers," Vestager said, stressing Korean companies are among the "handful" building the sophisticated vessels. "This would have led to less choice, higher prices and ultimately less innovation for European customers."


The combined market share of the two companies in LNG vessels is estimated to be around 70 percent.


Other countries, including China, Singapore and Kazakhstan, have approved the merger.


The Korean government noted that DSME will continue to operate as normal, especially as the shipbuilder's creditors have extended financial aid, including guarantees, until end of the year.


It added that Korea Development Bank (KDB), which is DSME's largest shareholder, will come up with plans to find a new buyer.


The Korean government noted that the impact of EU's decision will likely be limited considering that the Korean shipbuilding industry has improved, with global orders recovering to levels before the industry's struggle began in 2016.


The government cited Korea's strength in high-value and environmentally-friendly vessels.