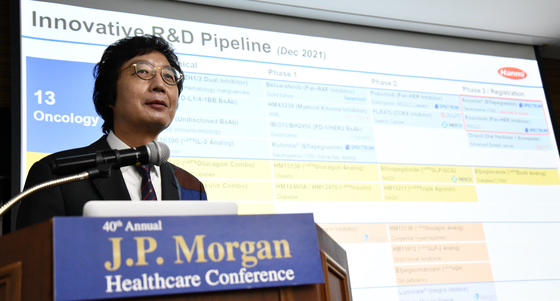 The drugs are Rolontis, intended to treat chemotherapy-induced neutropenia, and Poziotinib, a lung cancer treatment for which the Korean company signed a technology transfer deal with Irvine, California-based Spectrum Pharmaceuticals in 2015.

Hanmi was just one of four Korean biopharmaceutical companies that gave presentations in the Emerging Market track of the conference, which is for companies growing at a rapid pace with high-level technology. The conference was to take place in San Francisco, but was switched online due to rising Covid-19 cases.

The most successful Covid-19 vaccines so far, such as Moderna's and Pfizer's, are mRNA vaccines.

"Hanmi Pharmaceutical, which has some 30 pipelines in anticancer and rare diseases, will continue to build future growth based on the mRNA platform we successfully acquired," said Kwon. 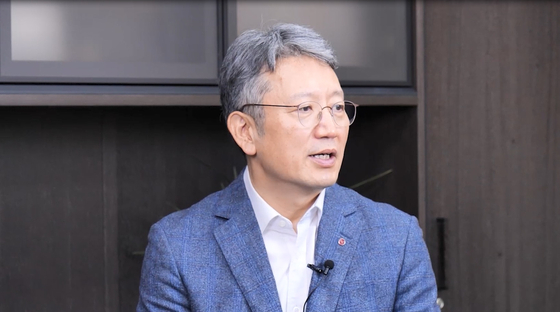 
LG Chem, a presenter in the emerging market track, introduced its major developments including Tigulixostat, a gout treatment candidate, which is set to start Phase 3 clinical trials in the United States and China this year.

Its non-alcoholic steatohepatitis (NASH) treatment, referred to as LR20056, is currently undergoing Phase 1 clinical trials in the United States. The company aims to complete the first round of trials this year, and start the Phase 2 trials right away.

"For the past five years, LG Chem has spent around 800 billion won in research and development in order to expand our pipelines," LG Chem Life Sciences Company President Son Jee-woong said during the presentation. "2022 will be the year we could bear some fruit including the gout treatment Tigulixostat."

The company has 21 pipelines candidates in pre-clinical and clinical trials, and of them, eight are anti-cancer drugs.

HK inno.N promoted K-CAB Tab, a treatment for gastroesophageal reflux diseases, the drug the company is best known for.

HK inno.N Chief Technology Officer Song Geun-seog said the company signed deals with a total of 26 foreign countries to export K-CAB Tab, and the drug generated 200 billion won in sales at the conference.

"We are planning to expand the indication of the drug and develop more varieties — injection-types, oral tablets and low content pills — and generate 2 trillion won in sales by the end of 2030," Song said.

Seegene, the only Korean test kit maker that got chance to make presentation in the conference, said it aims to develop 100 new diagnostic products this year.