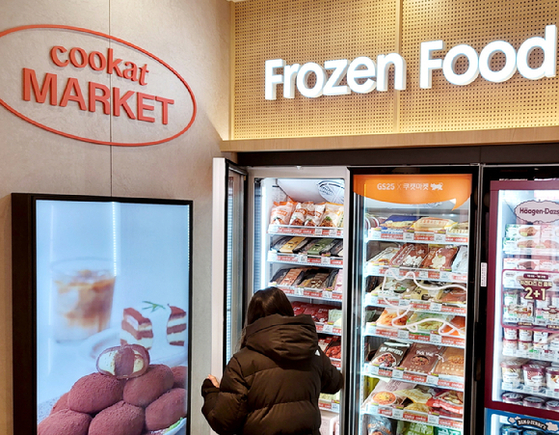 The company announced the deal Thursday, but didn't disclose the exact size of the stake it will acquire, saying the deal wasn't final yet.

The 55 million won will be used to purchase both existing shares and newly issued ones.

Seven percent of the start-up was acquired by GS Home Shopping in 2019 but became GS Retail's after the two companies merged.

Once the acquisition is finalized, Cookat will become a subsidiary of GS Retail. Current CEO Lee Mun-ju will continue to run the company.

Cookat is a food start-up specializing in social media. It started in 2014 by uploading cooking videos on Facebook and now operates global YouTube channels in Japan, Vietnam and Hong Kong. It sells some 220 food products both online and at Cookat Market stores.

Using the company's social media presence, GS Retail hopes to develop new food products for a younger generation. The company will set up stores in collaboration with Cookat and GS25, its convenience store chain, to sell Cookat products. It has partnered with Cookat in a smaller way in the past, setting up sections at select GS25 branches for Cookat products.

The company and Cookat will collaborate with Yogiyo, acquired by a GS Retail-led consortium last year, to include its food delivery expertise.

GS Retail has been investing in many businesses in search for future growth. It acquired 13 companies last year, including a 1.3 percent stake in Kakao Mobility, a 30 percent stake in Yogiyo and 19.53 percent of delivery start-up Mesh Korea.