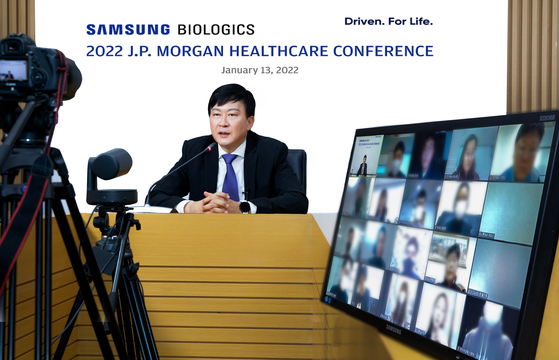 
Samsung Biologics will start partial operation of its fourth plant in Songdo, Incheon, in October this year, with plans to break ground on a fifth factory in the first half.

These are some of the updates provided by the company during the 40th annual J.P. Morgan HealthCare Conference.

The conference, which was originally to be held in San Francisco Jan. 10 to Jan. 13, was moved online due to Covid concerns and as some major companies withdrew from the event or said they would only be attending online. It is often referred to bio shopping mall for Wall Street investors with around 450 global companies and 9,000 investors participating every year.

Samsung Biologics gave a presentation during the main track of the conference, the only Korean company to do so, detailing the company's achievements and future goals. It is focusing on increasing production capacity, business portfolio expansion and growing its global footprint.

"The operation of fourth factory was originally scheduled for 2023, but we advanced the schedule by six months and will start partial operation, about 60,000 liters out of 256,000 liters, in October," CEO John Rim said during an online press conference Thursday. "The full operation will be ready by second quarter of 2023. It normally takes four years to construct a facility, but we are nearly two times faster than our competitors."

"For the fourth plant, we already signed three deals with global big pharmaceutical companies for five drugs, and are also in talks with 20 additional companies about 30 products," Rim said. 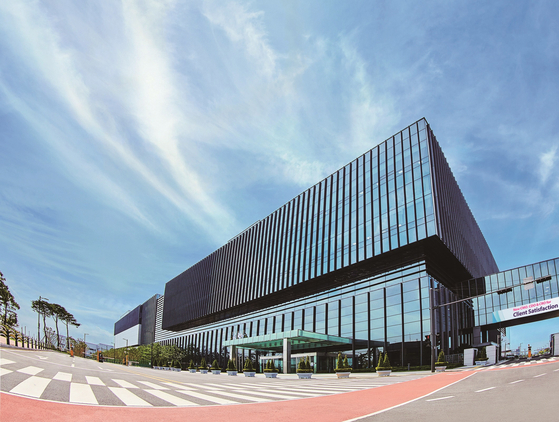 
The fourth plant is likely to bring the company's annual production capacity to 620,000 liters, which Samsung Biologics says is equivalent to nearly 30 percent of the global contract manufacturing capacity for biopharmaceuticals, beating Germany's Boehringer Ingelheim and Switzerland-based Lonza.

Rim also said the company already bought a site for fifth factory, which the company aims to break ground on in the first half.

The fifth plant will be a space for the company's new business — cell and gene therapies — which are biological treatments that alter cell and gene information to cure diseases.

Samsung Biologics is in the process of purchasing 100,000 pyeong (3.56 million square feet) of land in Songdo for additional facilities, with the aim of closing the deal in the second quarter. The site will be able to accommodate up to four new plants, and the company is reviewing the possibility of sixth, seventh, eighth and ninth factories.

When asked if the company has plans to build plants in the United States, he said, "we have been considering all possibilities," but building them in Korea is the "most reasonable choice at the moment considering all aspects like cost and speed."

Samsung Biologics is also looking forward to expanding its business portfolio, which is now mainly fill-and-finish contracts. Samsung Biologics and Massachusetts-based Moderna signed the package-and-bottle deal in May last year.

Its latest area of focus is mRNA, or messenger ribonucleic acid, which refers to a technology that directs cells to create spike proteins that trigger an immune response. The Moderna and Pfizer Covid-19 vaccines use mRNA.

"We already signed a deal with GreenLight Biosciences to manufacture their Covid-19 mRNA vaccines, and will start it in the second quarter of the year," Rim said, in reference to the Medford, Massachusetts-based company.

The company's contract and development organization (CDO) business is also well on the way, the CEO said, with the goal of building at least one more overseas research and development center in the United States. The company is thinking about Boston as of now, and even China in the future.

Established in 2011, Samsung Biologics has signed a total of 61 CMO deals and 82 CDO deals, worth about $7.1 billion as of end of September last year. The company has many global big pharmaceutical companies as customers, including Cambridge, Britain's AstraZeneca, Brentford, Britain's GlaxoSmithKline and Eli Lilly of Indianapolis.