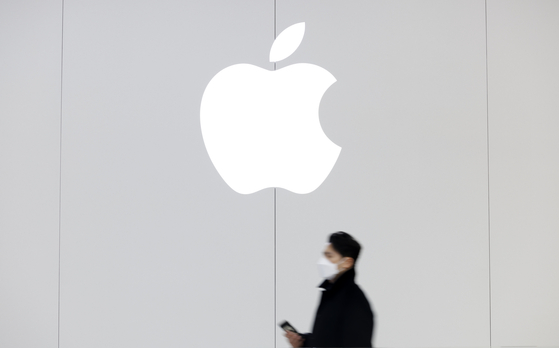 A pedestrian passes the Apple Store in Yeouido, southern Seoul, on Jan. 4. [YONHAP]


Apple was forced to release two years of financial data about its performance in Korea, showing strong sales but modest profits due to high investments costs.

The Korean unit of Cupertino, California’s tech giant Apple released two years of financial data in a regulatory filing on Tuesday, complying with a 2019 revision of the external audits law, its first disclosure since 2009.

The new data shows rising revenue against falling profit, as sales of the iPhone 12 series were spent on investment in the country.

Sales were 7.1 trillion won in that most recent period, up 24.2 percent compared to the 12 months before.

iPhone 12 models were released on Oct. 23, 2020 and 2.5 million were sold in Korea in the seven months after their release. Apple Korea generates revenue from the sales of electronic gadgets such as its famed iPhones, iPad tablets and Mac computers, as well as related software and services.

During the same period, annual operating profit decreased by 13.3 percent on year to 111.5 billion won. Return on sales decreased from 2.3 percent during the October 2019 to September 2020 period to 1.6 percent in the following 12 months.

The decrease in net likely came from the investments Apple has been making in Korea, said an industry insider who asked not to be identified.

"Apple Korea has been preparing to open a training center for Korean SMEs and developers and an R&D center, which could have led to the decrease in profit," the source said.

During the most recent period, Apple Korea spent 49.4 billion won in sales subsidies for cellular companies, 119 percent more than the 22.6 billion won spent the year before.

Korean law now requires limited liability companies with more than 50 billion won in annual sales to disclose financials. A revision of the Act on External Audit of Stock Companies went into effect in November 2019.

The revision was made after criticism that Korean companies faced unfair competition from foreign companies operating as limited liability companies who didn't have to disclose their performances.

Apple Korea's earnings report was revealed this week because it closes its accounts in September.

Sales of the iPhone 13 series will be reflected in next year's earnings, as the phones were released on Oct. 7. Apple sold over 40 million iPhone 13 models globally during last December's holiday season, according to investment bank Wedbush's analyst Daniel Ives.

Revenues from its Apple TV+ online video streaming platform will also be accounted for next year. The service began on Nov. 4 in Korea.


"Apple has been operating in Korea for over 20 years and we're proud to support more than 325,000 jobs," Apple said.

"We continue to invest locally and are looking forward to opening our new Developer Academy and R&D Manufacturing Accelerator in Pohang in the coming months."