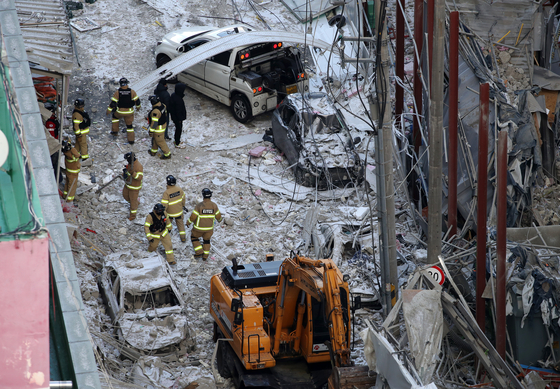 Firefighters and rescuers on Thursday search for workers who have been missing since a high-rise apartment being built in Gwangju partially collapsed on Tuesday. Five workers were accounted for as of Thursday. [YONHAP]


One of six missing workers was detected within the rubble of the partially collapsed apartment building in Gwangju on Thursday.

The worker, whose identity and condition were not released as of press time, was discovered to be in the basement of the building, buried under the debris, according to authorities.

The search for the missing workers had recommenced at 9:30 a.m. Thursday, with some 50 fire fighters and rescue workers and 10 search dogs. Drones equipped with thermal cameras were also used.

The worker was found at around 11:14 a.m. with a special industrial camera, according to authorities, but his body, buried under concrete chunks and other debris, was not able to be immediately recovered.

A facade of a high-rise apartment being built in Hwajeong-dong, Gwangju, crumbled on Tuesday, leaving six workers missing and one other injured.

The apartment was being built by Hyundai Development Company (HDC), the same company whose workers are currently on trial for a construction accident in the city seven months ago that killed nine and injured eight.

Construction workers were pouring concrete on the roof of the 39-story apartment in the afternoon on Tuesday when the facade, or the outer wall, from floors 23 to 38, crumbled.

The cause of the collapse wasn’t immediately clear, as were the locations inside the building where further collapses may have taken place.

One worker, who was hit directly by the debris on the ground floor, was hospitalized Tuesday.

Six workers out of the total 394 workers, who work for 22 different subcontractors hired by HDC to work on the apartment complex, were unaccounted for through Wednesday.

The police could locate the cellphone signals of each of these workers within a 2-kilometer (1.6-mile) radius from the site. None of them could be reached by phone.

They believe at least four out of the six were trapped in the building or under the debris, as they were confirmed by their companies or relatives to have been on the site when the collapse took place.

The search-and-rescue work was impeded through Thursday as experts deemed the building to be at risk of additional collapses.

A tower crane attached to the apartment was also partially destroyed by the collapse.

The authorities plan to take down the rest of the crane using another crane being sent to Korea from overseas, expected to arrive at Busan Port by Jan. 15, according to the police.

Police on Thursday searched the offices of three subcontractors who had carried out the formwork for the apartment. They also banned a site manager of HDC from leaving the country.

HDC’s president held a press briefing near the site on Wednesday to apologize for the accident.

Because construction work in Korea could involve dozens, if not hundreds, of subcontractors, the people held responsible for construction accidents are usually site managers instead of CEOs.

Last January, the National Assembly passed a law specifying that CEOs and executives of construction companies can be held accountable for construction accidents. The law is to go into effect on Jan. 27.

The Ministry of Land, Infrastructure and Transport created a committee on Wednesday to investigate the cause of the accident. The committee will report its findings in two months.