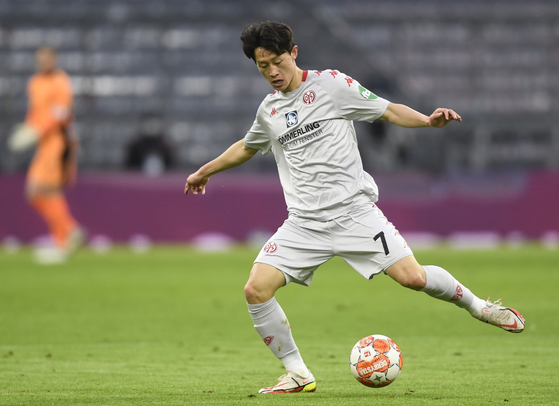 Mainz's Lee Jae-sung controls the ball during a German Bundesliga match against Bayern Munich at the Allianz Arena in Munich on Dec. 11, 2021. [AP/YONHAP]


Moving to FSC Mainz has helped Lee Jae-sung feel at home both on and off the pitch, the Korean midfielder said Wednesday as he marked six months with the Bundesliga club.


"There are definitely more Koreans here who help me a lot, just like my teammates," Lee told German reporters Wednesday. "That's why I feel at home here."

Lee joined Mainz on a three-year contract in July after two years with Holstein Kiel in the second-tier Bundesliga league. A move that not only took him to a higher level of German football, but also into the Rhineland area of western Germany, home to one of the country's largest Korean communities.

The midfielder immediately slotted into the action in Mainz, missing only two games in the last six months and recording three goals and two assists. That strong start has already earned him his own chant from the Mainz fans.

"I hear that during games and I'm very grateful for it," Lee said. "My goal is to hear them shout even louder."

Lee told reporters that a big part of his decision to join Mainz over other clubs was head coach Bo Svensson.

"Before I signed the contract, I had two conversations with Svensson," Lee said. "He really wanted me and he had a goal for me. I think that I have learned a completely different kind of football from him. He prioritizes a very dynamic game."

Despite the three goals so far this season, Lee admits that he initially struggled to adjust to the top tier.

"I assumed that I would need some time to settle in," Lee said. "And I was aware that the league demands more technical skill. Initially, I struggled with pacing and endurance. It was much more difficult than I expected."


Lee is also a regular on the Korean national team, with 59 caps since he first appeared in 2015, and is expected to be called up for two 2022 Qatar World Cup qualifiers later this month. He was one of three goal scorers in the Taeguk Warriors' most recent qualifier, against Iraq on Nov. 17.