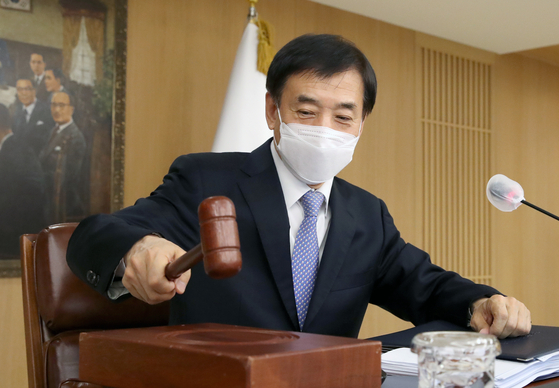 Bank of Korea Governor Lee Ju-yeol presides over the first rate-setting meeting of this year on Jan. 14, [YONHAP]


The Bank of Korea raised rates by 0.25 percentage points to 1.25 percent on Friday.

They are now back at pre-pandemic levels.

Rates had been taken down to a record low of 0.5 percent as the economy suffered during the outbreak.

With inflation now high and possible bubbles in asset markets, the central bank has been warning of tighter monetary policy and has been ahead of most major markets in increasing rates.

Consumer prices rose 2.5 percent in 2021, the highest in a decade, while home prices rose the fastest among major markets in the third quarter of last year.

The monetary policy board of the central bank began raising the base rate last year, with two increases in 2021. The last was in November.

Earlier this month, Bank of Korea Gov. Lee Ju-yeol said the central bank will “moderately adjust the easing of the monetary policy in accordance with economic improvement."

In a report released on Jan. 4, Na Seung-doo and Kim Do-hyun, analysts at SK Securities, forecast two rate increases this year, one in the first quarter and another in the third quarter.