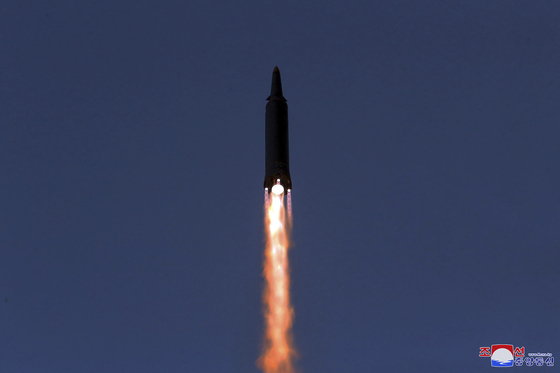 The JCS said the projectiles were launched from Uiju in North Pyongan Province, bordering China, and flew around 430 kilometers eastward at an altitude of 36 kilometers. The South Korean military detected the first missile at 2:41 p.m and the other at 2:52 p.m.

The missiles flew at a top speed of around Mach 6, or six times the speed of sound, according to the military.

This marks the North's third missile test this year.

A spokesperson for the North's Foreign Ministry said in a statement carried by its official Korean Central News Agency (KCNA), "The U.S. is coming out provocative again, finding fault with the DPRK's exercise of its right to self-defense."

The DPRK is the acronym for the North's full name, the Democratic People's Republic of Korea.

"If the U.S. adopts such a confrontational stance, the DPRK will be forced to take stronger and certain reaction to it," added the spokesperson, without specifying further.

On Jan. 5 and Tuesday, North Korea conducted what it claimed to be successful hypersonic missile tests.

Hours later, the Joe Biden administration Wednesday implemented its first sanctions on Pyongyang over a series of ballistic missile tests since September last year, blacklisting seven individuals and one Russian entity thought to be involved in procuring goods for the North's weapons of mass destruction (WMD) program from Russia and China.

U.S. Secretary of State Antony Blinken said that the United States "will use every appropriate tool" to address the North's WMD and ballistic missile programs. However, he stressed that the Biden administration remains "committed to seeking dialogue and diplomacy" and called on Pyongyang to "engage in negotiations."

"The DPRK's recent development of new-type weapons was just part of its efforts for modernizing its national defense capability," said the North Korean Foreign Ministry spokesperson. "It did not target any specific country or force and it did not do any harm to the security of neighboring countries."

The spokesperson accused the United States of "intentionally escalating the situation" through the implementation of unilateral sanctions, "not content with referring the DPRK's just activity to the UN Security Council."

The spokesperson added, "This shows that though the present U.S. administration is trumpeting about diplomacy and dialogue, it is still engrossed in a policy [of] isolating and stifling the DPRK."

Accusing Washington of "gangster-like logic," the spokesperson stressed that North Korea "will not abandon its just right" to bolster up its national defense capabilities, stressing it is the "legitimate right of a sovereign state."

The remarks appear to give an answer to Washington's offers of unconditional dialogue to resume denuclearization negotiations that have been at an impasse since 2019.

Blinken said in an interview on MSNBC Thursday about the latest missile launches, "I think some of this is North Korea trying to get attention."

The Biden administration has "waited to see if they are prepared to engage," said Blinken, noting that "not only has there been no response to those overtures," but the response has been in recent weeks "renewed missile tests, something that is profoundly destabilizing."

The United States is "deeply engaged both at the UN and with key partners," including South Korea and Japan, "on a response," he added.

The United States is proposing additional sanctions on the North in the 15-member UN Security Council over its recent missile launches, though it is unclear if other veto-wielding members China and Russia will agree.