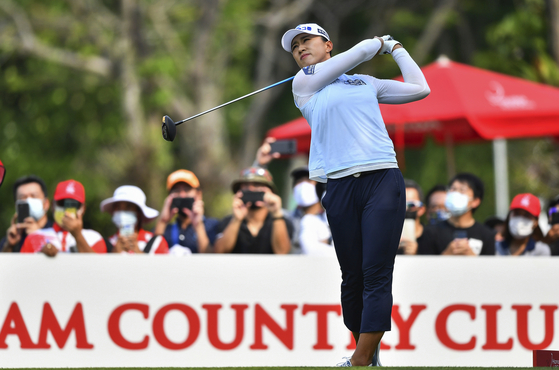 Amy Yang watches her shot on the first hole during the final round of the LPGA Honda Thailand golf tournament in Pattaya, southern Thailand on Sunday. [AP/YONHAP]


Three Koreans landed in the top 10 at the Honda LPGA Thailand tournament over the weekend, with Amy Yang finishing tied for fourth, Kim Hyo-joo tied for sixth and Lee Jeong-eun tied for eighth at Siam Country Club in Chonburi, Thailand on Sunday.

Yang carded a 64 on the final round of the tournament, her best score of the event, for a total score of 23-under-par, 265, good enough to tie for fourth alongside Brooke Henderson of Canada.

Yang was looking to clinch her fourth Honda LPGA title and build on her unparalleled record at the event. Yang has a total of four LPGA titles, three of which were won at the Honda LPGA Thailand tournament. The other title is from 2013, when she won the KEB-HanaBank Championship.

Yang first won the tournament in 2015 with 15-under-par, 273. The following year Lexi Thompson of the United States won, with Yang finishing tied for third.

In 2017, Yang came back and won again with 22-under-par, 266. Once again she missed out the following year, this time tying for 14th, with Nelly Korda of the United States winning.

In 2019, Yang did it all over again with the same score of 266. The Honda LPGA was canceled in 2020 due to the Covid-19 pandemic, making the 2021 tournament the next in the sequence — Ariya Jutanugarn of Thailand won and Yang finished tied for third again.

Sequentially speaking, this should have been Yang's year again, but this time her 23-under-par was not enough to win the top spot. 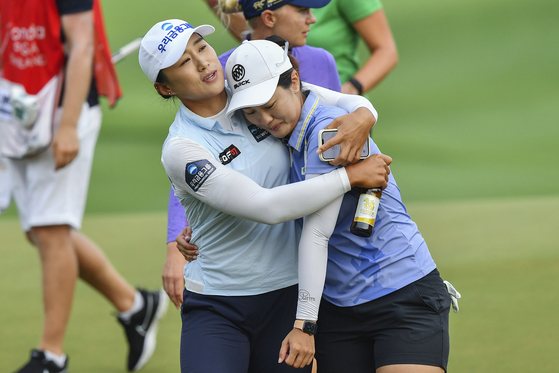 Amy Yang, left, hugs Xiyu Janet Lin of China after the end of the final round of the LPGA Honda Thailand golf tournament in Pattaya, southern Thailand on Sunday. [AP/YONHAP]


Sunday’s final round was a close match until the very end as Nanna Koerstz Madsen of Denmark, who led the pack, parred the par-4 17th and bogied the par-5 18th while Xiyu Lin of China birdied the last two holes, stretching the match to a sudden-death playoff.

But it was the Danish golfer who got to take home her first-ever LPGA trophy in the end, draining a 10-foot putt on the second playoff hole to eagle and become the first-ever Danish golfer to win the tournament.

Koerstz Madsen and Lin finished at 26-under-par overall to set a new tournament scoring record, breaking the 25-under-par record set by Jessica Korda of the United States in 2018.

Kim Hyo-joo tied for sixth alongside Jennifer Kupcho of the United States with a total score of 22-under-par, 266. Kim had only one bogey during her four rounds, on the par-4 fifth on moving day. In the second round, Kim carded an eagle on the par-5 seventh. Kim’s final round on Sunday was bogeyless with seven birdies.

Lee Jeong-eun also had a bogeyless last round, carding eight birdies for a total score of 20-under-par, 268, tying for eighth alongside three other golfers.

Last week at the HSBC Women's World Championship in Singapore, Lee narrowly missed out on winning the trophy after taking a tied lead with countrywoman Ko Jin-young on the second-to-last hole. But on the last hole, Lee slipped, carding a double bogey that left her tied for fourth and Ko lifting the trophy.

This weekend marked both Lee and Yang's second consecutive top-10 finish, putting Lee at No. 17 in the world and Yang at No. 57.