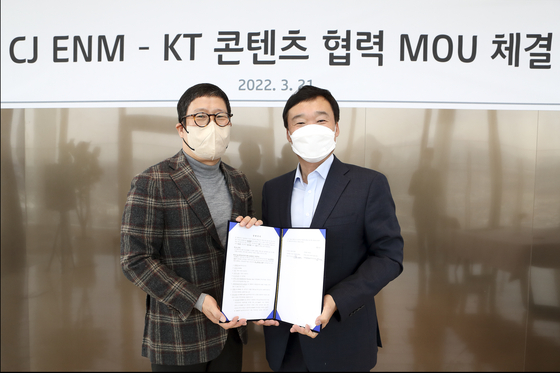 
CJ ENM is investing 100 billion won ($82.4 million) in KT Studio Genie, a content production subsidiary of carrier KT, to collaborate on the development and distribution of original content.

The size of the stake to be acquired was not announced, according to an electronic disclosure by CJ ENM on Monday.

The agreement will grant CJENM early distribution rights to original creations by KT Studio Genie, which can be streamed or aired on CJ ENM-owned TV channels and platforms including tvN, OCN and streaming platform Tving.

The two companies will also cooperate on music streaming, although they declined to give details.

Another area of cooperation is producing immersive media content as the two companies agreed to create a joint investment fund for the project.

“The cooperation with KT, a leading media platform operator, will give a big boost to CJ ENM’s efforts to become a global entertainment company,” said Kang Ho-sung, CEO of CJ ENM, in a statement. “We will expand the partnership to create synergy across content businesses.”

Yoon Kyung-lim, KT’s head of group transformation division, echoed those expectations.
“KT Studio Genie will be able to accelerate the push to acquire production capability and original intellectual property through a partnership with CJ ENM,” Yoon said in the statement.

KT to invest 500 billion won over 3 years in entertainment