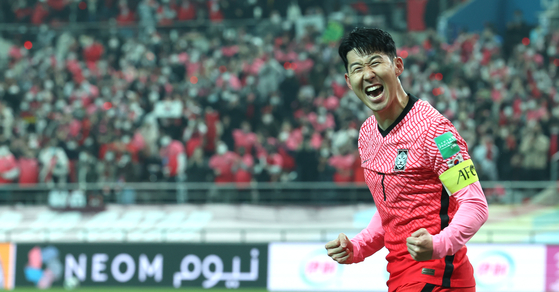 
Korea defeated Iran 2-0 in the penultimate qualifier for the 2022 Qatar World Cup on Thursday, beating their long-term rivals in a dominant performance at Seoul World Cup Stadium in Mapo District, western Seoul.

Pride and bragging rights were the main thing on the line in Thursday's game, and Korea earned both. Both countries have already earned their tickets to the World Cup, with the penultimate qualifier offering a chance for two of Asia’s biggest rivals to test their skills against each other in front of a sold-out crowd stadium.

The win also allowed Korea to overtake Iran for the top spot in Group A in the third round of Asian qualifiers for the World Cup. Although the top two teams advance to the World Cup equally, Korea has always aimed to finish in the No. 1 spot.

Head coach Paulo Bento played an unusually offensive lineup, not choosing to hold any of the big names back as fresh legs for the second half as he had done in previous qualifiers.

Instead, Korea had arguably the five strongest forwards the country has to offer on the pitch — Tottenham Hotspur’s Son Heung-min, Bordeaux’s Hwang Ui-jo, Wolverhampton Wanderers’ Hwang Hee-chan, Mainz’s Lee Jae-sung and Gimcheon Sangmu’s Kwon Chang-hoon — with Jung Woo-young to back them up in a more traditional midfield role.

Iran responded with an equally defensive approach, crowding their own box with bodies to shut down Korea’s attack. The Middle Eastern team may outrank Korea, but on an individual level, Korea had four players from three of Europe’s top leagues on the attack and Iran wasn’t taking any chances.

Yet despite the all-out offensive and Korea’s 68 percent possession in the first half, the game stayed fairly matched and neither team was able to get much time in front of goal. There were only four shots in the entire half and just one of those was on target.

But that one was all that mattered, and it came from Korea’s captain Son two minutes into injury time. Son took control of the ball just outside the box, weaved through two defenders and then hammered the ball at the goal. 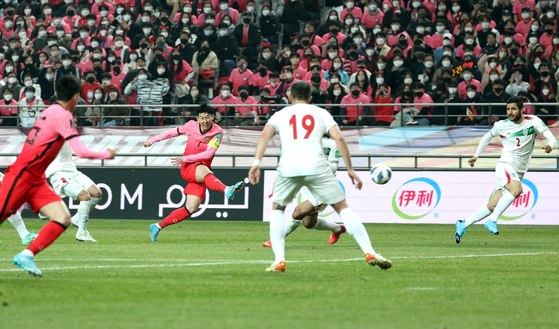 
The Iranian goalkeeper was able to stop the shot, but it was hit with enough force to bounce off his knee and rebound into the back of the net to take the score to 1-0 to end the first half.

The Taeguk Warriors appeared to struggle to find their feet at the second half, with Iran largely dominating the first 15 minutes after an initial flurry of chances.

That stalemate was broken in the 63rd minute with a well executed series of short passes that saw Hwang Hee-chan take the ball down the side of the box almost to the goal line and knock it back a few feet to Lee Jae-sung, who slotted it through the defenders to Kim Young-gwon to hammer into the back of the net. 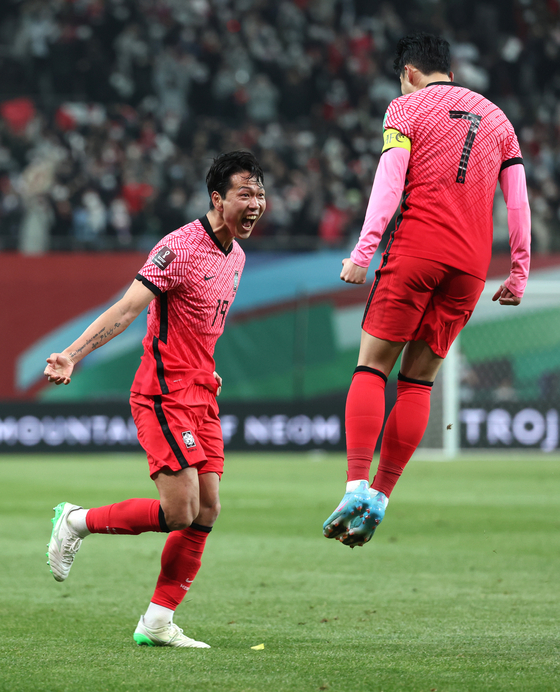 
With the score at 2-0, Bento made his first substitution of the game. Hwang Ui-jo was brought off for Gimcheon’s Cho Gue-sung, who was on the pitch for less than a minute before he had to step off briefly to receive medical attention after taking an elbow to the face.

Fenerbahce center back Kim Min-jae was the next to go off, replaced by Park Ji-su in the 79th minute. His absence was immediately noticeable, with Iran breaking through the defense twice in the following few minutes and coming very close to scoring.

Neither team was able to break through in the final 10 minutes of the game despite multiple opportunities, with Korea taking what ended up being an unexpectedly comfortable 2-0 win.

“I want to express my gratitude toward the fans who cheered for us,” Son said after the game. “We were able to win thanks to the cheers and support. I do still think we could have won with a bigger score difference.

“I do not think our teamwork is perfect yet, but we spent a lot of time working together to make it perfect. I think we could win today thanks to each player’s sacrifice. I was grateful for all our players and staff. The qualifiers are not over, as we still have one more match left.”

With the victory, Korea have broken an 11-year run without a win against old rivals Iran. The Taeguk Warriors last win against the Middle Eastern side was at the Asian Cup in 2011, with Iran winning four and three draws since then.

The two sides earlier held each other to a 1-1 draw in the first leg of the third round qualifiers, with Son scoring the opening goal for Korea in the 48th minute and Iran's Alireza Jahanbakhsh equalizing in the 76th.

While the result was irrelevant in terms of World Cup qualification, it could still affect the final tournament.

FIFA announced on Tuesday that the World Cup draw will be made on April 1 in Doha, Qatar, using world rankings published on March 31. Teams will be placed into four pots dependent on their world ranking, with the win potentially moving Korea up a pot. In practice, this has little real meaning as the draw is still almost entirely luck, with the pots only serving to spread out the similarly-ranked teams.

Korea will next take on the United Arab Emirates in the final qualifier for the 2022 Qatar World Cup against the UAE on Tuesday at Al-Maktoum Stadium in Dubai.