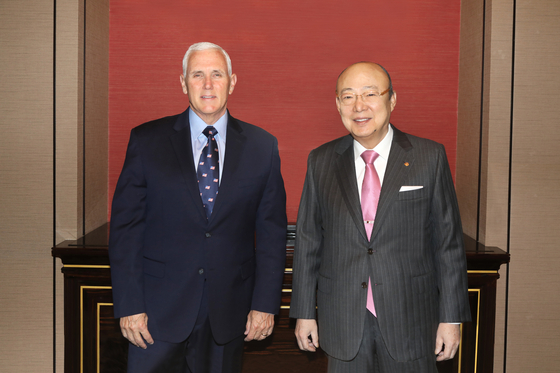 In a luncheon at the Westin Josun Hotel in central Seoul on Thursday, the two agreed on the need for close communications among major economies to navigate intensifying uncertainties caused by Russia’s invasion of Ukraine.

Kim underlined the need for people in political, religious and economic fields to cooperate to ensure peace on the Korean peninsula, a land technically at war.

During the meeting, Hanwha's Kim suggested that global leaders pool their knowledge and expertise to help resolve economic problems facing the world, highlighting the impact that geopolitical tensions have on corporations.

In a statement, Hanwha said it was the first time its chairman and the former vice president had met, but they have a mutual acquaintance, Edwin John Feulner Jr., founder of the U.S. conservative think tank The Heritage Foundation.

Hanwha’s Kim has known Feulner for more than 40 years, and they regularly have discussions and meetings.

Pence also has a connection with The Heritage Foundation as he has served as a visiting fellow for the institute since 2021.

Pence delivered a speech on the Korea-U.S. alliance on Friday during a conference attended by 300 people. On the same day, he talked about his Christian faith in an event hosted by the Far East Broadcasting Company.