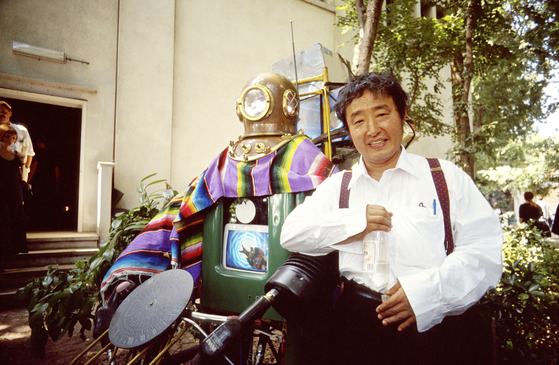 The Korean artist is renowned for being the pioneer of video art, and his works were largely the result of thinking outside the box — for instance, he used magnets to distort television signals to create rainbow patterns on the screens. His version of a “symphony” was not a consonance of the sounds from playing classical instruments; rather, it was a mixture of destruction, discomfort and eccentricity.

Paik’s artworks do indeed seem to have been way ahead of his time, and maybe even still are. This may explain why his works have sometimes been deemed difficult to understand by the general public.

In an attempt to turn this preconception around, the Nam June Paik Art Center in Yongin, Gyeonggi, has two new exhibitions exclusively on the avant-garde artist — one that showcases 10 notable moments of Paik’s life and another that “performs” a symphony composed by Paik in 1961. 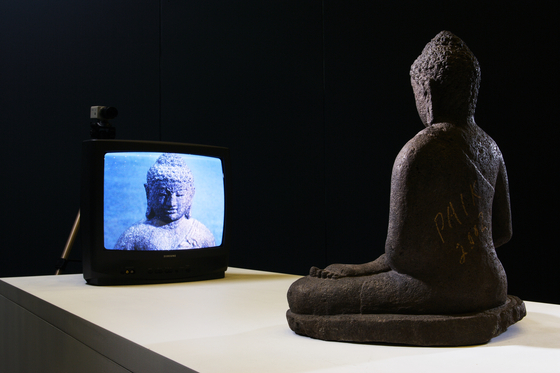 
This year is the 90th anniversary of Paik’s birth, and the museum has just begun to unravel the festivities that await to celebrate the late artist and his accomplishments.

The first exhibition, “Archeology of Avantgarde,” which has arranged 10 photographs featuring Paik and his related works in reverse order from 2000 to 1964, offers an insight to why Paik was so absorbed in television and media that most were unfamiliar with during his time.

“Paik once said that when he was 15 years old, he was immediately drawn when someone said ‘Schoenberg is the ultimate avant-garde.’ As if something echoed from within the depth of his soul, ‘avant-garde’ became his goal and direction in life,” the exhibition’s curator Lee Soo-young said during a press conference on Thursday.

Arnold Schoenberg (1874-1951) was an Austrian-American composer and a significant role model in Paik’s life as an artist — he wrote his graduation thesis on Schoenberg at the University of Tokyo and later studied abroad in Germany to learn more about the composer’s works. 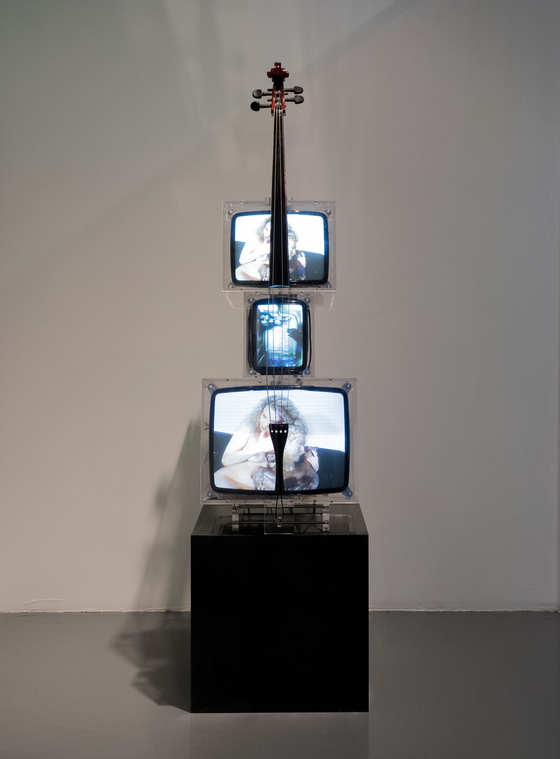 
Thanks to his fascination in Schoenberg, Paik didn’t experiment with only videos. In 1977, he released the limited edition LP “My Jubilee ist Unverhemmet.”

The name is a mixture of English and German that roughly translates to “My festival is unrestricted.” Lee explained that the song itself is Schoenberg’s string sextet “Transfigured Night” (1899) played four times slower, and this was because Paik became “disappointed” in Schoenberg’s music during his studies in Germany and decided to “upgrade” them in his own novel ways.

Paik was so engrossed his whole life in the concept of being avant-garde that two weeks before his 45th birthday in 1978, he said that “now is the time to create the archeology of the avant-garde,” according to the museum. This, therefore, became the name of the exhibition.

“Archeology of Avantgarde” has compiled and compressed Paik’s most famous works, ranging across tapes and videos to lasers and satellites, including “Rehabilitation of Genghis Khan” (1993), “Good Morning Mr. Orwell” (1984), “TV Buddha” (1974) and “TV Cello” (2002). Paik even built robots; his first-ever robot piece “Robot K-456” (1964), which was remote-controlled, is also being exhibited.

The use of television screens as his recurring art form is known by most, but the fact that Paik even wrote symphonies may seem almost out of character. 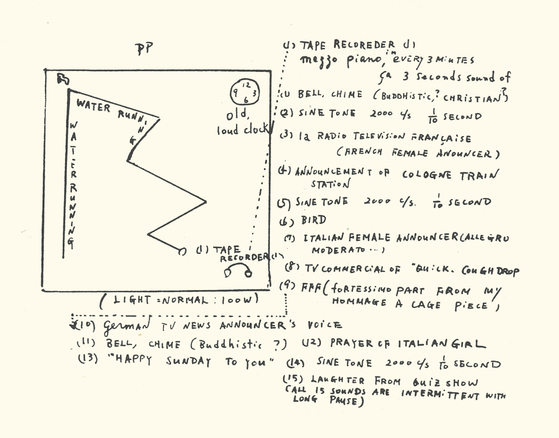 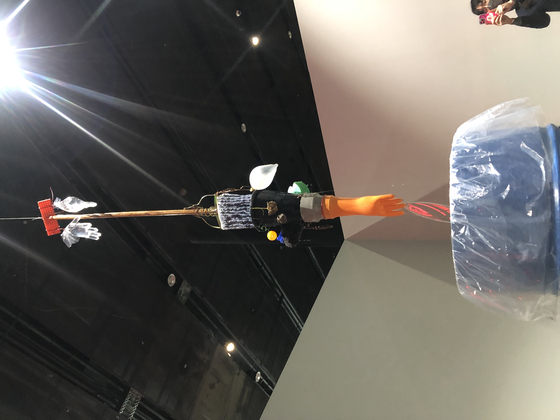 How the above text score has been embodied in the exhibition. It was created by artist Kwon Yongjoo. [SHIN MIN-HEE]


“The Last Consummate Second – Symphony No. 2” is the second exhibition at the Nam June Paik Art Center which presents a performance of “Symphony for 20 Rooms,” a text score composed by Paik in 1961.

“Symphony for 20 Rooms” was Paik’s second composition that he wrote, but it was never performed while the artist was alive. This exhibition is the museum’s rendition of the entire piece with the help of seven teams of contemporary artists.

Just by these explanations, it is difficult to decipher: How exactly does an exhibition “perform” a symphony? Does an orchestra get together and play a musical score in harmony all day long? Or has it been filmed on camera?

The answer to both questions is no, because Paik wasn’t someone who played by the rules. His symphonies weren’t only about sound: They were also about visuals, touch and smell.

“Symphony for 20 Rooms” was meant for 16 “rooms” — or more accurately, sections — where Paik has written instructions for each one. These notes are referred to as “text scores,” and they serve the same purpose as regular musical scores.

Why the title has included 20 rooms when in reality it was actually intended for 16 remains a mystery, but in his 1962 writing “About the Exposition of the Music,” Paik explained that “the audience has a choice of at least 20 different sound sources, between which they can freely circulate.” 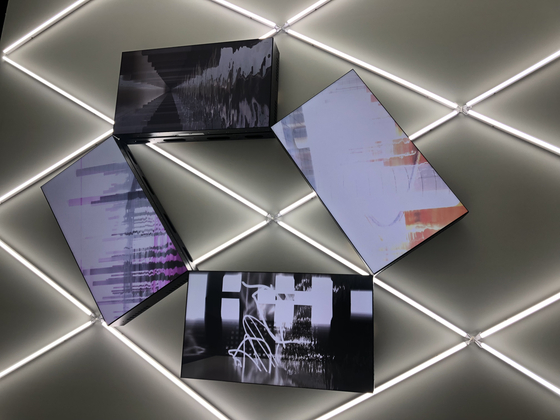 
So much is present at the same time in these rooms: sounds of tape recorders or chickens, sine wave generators, a terrible orchestra, some hands-on experiences and so on.

For example, the fifth room, “Fortissimo Cellar (fff)” was written out by Paik to be “as bright as possible,” “torture,” “white reflexing wall” and “3000 watts.” The “fff” in the title refers to fortississimo in music dynamics, which means “very, very loud.” Kim Daum, the artist who took charge of this room, said that he thought long and hard about what Paik had meant by “torture” while creating it.

Sure enough, the room is all but blinding as it causes visitors to squint while passing by due to the bright white florescent lights around the walls.

Another room, No. 13, is located in-between other rooms and is displayed as an empty black board without any details.

“While other rooms are filled with specific directions, this one is completely blank,” the exhibition’s curator Han Noo-ri said. “But it can also mean that Paik intended for the events or sounds to be more unpredictable here than other rooms. It’s not literally empty; rather, it is full of possibilities.”

For the 12th room, Paik instructed that it be a "free orchestra made up of bad players." The three-channel video by Ji Park has musicians playing the violin with a toothbrush, wrecking string instruments or making screeching sounds on them with their bows. [NAM JUNE PAIK ART CENTER]


The final three rooms encourage “audience participation.” One involves altered and disassembled pianos that produce sounds different from a normal one that visitors can play themselves, and another has several fragments of wood, stones, pebbles and metal that Paik hoped the audience would “kick around" and "enjoy the sounds and [the] tactile feeling" of them. Lastly, the final room has an old record player from the 1910-'20s that visitors can choose from among a range of LPs to listen to.

Eventually, the sounds from “Symphony for 20 Rooms” naturally merge altogether as one whole whimsical symphony.

“Archeology of Avantgarde” runs until Sept. 18, while “The Last Consummate Second – Symphony No. 2” ends June 19. The Nam June Paik Art Center is open every day except Mondays from 10 a.m. to 6 p.m. Admission is free.