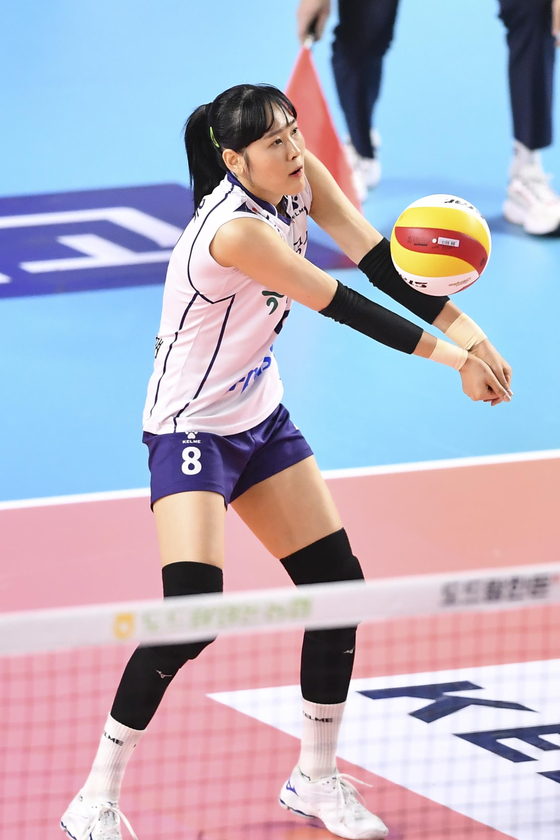 Yim will earn 300 million won in annual salary with 50 million won in incentives each year. Under the new contract, Yim earns almost double what she has made for the last three seasons.

The previous highest salary earned by a libero was 260 million won by Oh Ji-young with Korea Ginseng Corporation in 2020.

Yim made her professional debut at KT&G, now the Korea Ginseng Corporation, in 2005 and was traded to Korea Expressway Corporation in 2015.

Since then, Yim has led Korea Expressway Corporation to their first championship trophy in the 2017-18 season and this season topped the table for the most receives, digs and defense for a third consecutive season.

"I am so grateful to the club for trusting me and offering a good deal,” Yim said in a statement released by the club. “I'll leave my regrets behind this season and I will come back next season with a better performance."

Women’s volleyball has long been popular in Korea, but the increase in Yim’s salary reflects the heightened interest in the league.

The average viewer rating of women's volleyball games this season was 1.18 percent, the second highest viewer numbers in the history of the V League. The highest was last season’s 1.23 percent, when Korean volleyball star Kim Yeon-koung came back to the domestic league.

This season’s match with the most viewers was between Korea Ginseng Corporation and the Industrial Bank of Korea, at 2.07 percent.

Despite a successful season, the women’s V League screeched to a halt on March 21, as all remaining scheduled games and the postseason were canceled as the number of Covid-19 cases continued to climb.

The premature end to the season meant that for the second time in the last three years, Suwon Hyundai Engineering & Construction Hillstate were unable to win the V League title despite dominating for the entire season and being just one win away from winning the trophy.

Korea Volleyball Association (KOVO) announced that the season will end after a match between the Heungkuk Life Insurance Pink Spiders and Seoul GS Caltex at Samsan Gymnasium in Incheon on March 21.

The decision came after both the Pepper Savings Bank AI Peppers and the Industrial Bank of Korea Altos failed to field the minimum 12 players for their next match due to injuries and a growing number of players testing positive for Covid-19.

As a result, the women’s V League does not have a champion to crown this year. Currently, Hillstate tops the table with 82 points after 28 wins and three losses, Korea Expressway Corporation Hi-pass is second with 70 points, Kixx is third with 62 points, Korea Ginseng Corporation is fourth with 46 points, the Altos are fifth with 31 points and the Pink Spiders are sixth with 31 points. The brand new AI Peppers trail with 11 points.

A total of 13 players in the women’s V League, including Olympian Yang Hyo-jin of Hyundai Hillstate, have qualified as free agents after the 2021-22 season came to an end.

Hillstate just one win away from season title

A tense week of volleyball