Tomorrow X Together shows new side with fourth EP

Tomorrow X Together shows new side with fourth EP 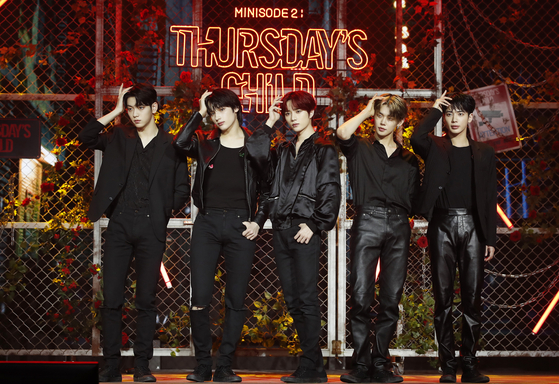 
“The hardest part was when we were told to show ‘uncontrollable anger’ for the music video.”

Hueningkai of Tomorrow X Together made this remark during the boy band’s showcase held on Monday for its new EP “minisode 2: Thursday's Child” at the Yes 24 Live Hall in Gwangjin District, eastern Seoul.

“None of our members really get angry easily and are quite meek,” Hueningkai continued. “We had to study characters in films and dramas to act out that emotion.”

“minisode 2: Thursday's Child,” which dropped at 6 p.m. the same day, is the band’s fourth EP. Its lead track “Good Boy Gone Bad” tells the story of “a boy who has experienced his first love and first heartbreak” and “the complex emotions he feels,” according to the band’s leader Soobin. The concept is a shift from the pure, fresh image Tomorrow X Together is known for. 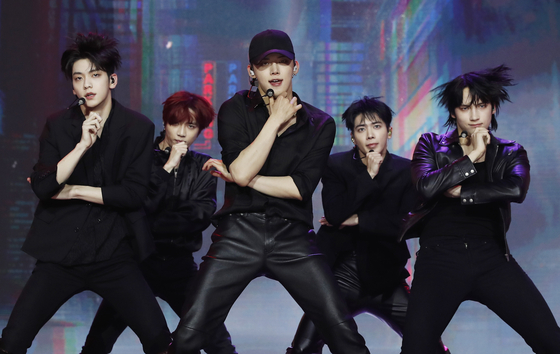 Tomorrow X Together performs its new lead track "Good Boy Gone Bad" during a showcase on May 9. [NEWS1]


The group of five — Yeonjun, Soobin, Beomgyu, Taehyun and Hueningkai — sat down to discuss the EP after performing its new tracks “Good Boy Gone Bad” and “Trust Fund Baby,” a pop ballad with soothing vocals but cynical lyrics about a world that requires money for love.

“'Good Boy Gone Bad’ is a hardcore hip-hop track with rock sounds that shows how a boy’s first breakup turns him dark,” said Hueningkai about the lead track, which the members dubbed a “Gen Z breakup song.” The angry lyrics, as well as the darker-toned music video, is a departure from Tomorrow X Together's innocent boyish image.

“When I first heard the song, I thought ‘it’s finally here,'” Hueningkai continued. “I had been thinking we would do a concept like this someday. So far, we’ve shown you how a boy meets someone and grows by experiencing love. I think heartbreak is also a large part of personal growth, as it makes you discover new sides of yourself.” 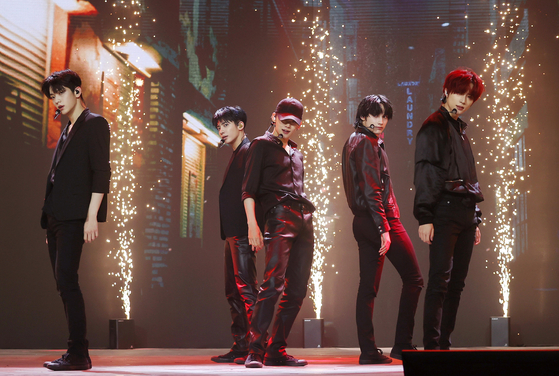 
Last month, the boy band often referred to as “BTS’s younger brother” raised anticipation for its comeback when “minisode 2: Thursday's Child” sold over 1.45 million preorders within the first six days of its release, breaking the band's own record. The EP is set to become Tomorrow X Together's first million-seller since its debut.

“It’s our fourth year, and we’ve been able to grow as a team while also achieving each of our personal goals,” said Beomgyu. “Compared to a couple years ago, we’ve been able to take on a wider range of genres. The members’ lyrics and vocals really made my producing come to life. I stayed up many nights to produce the track, and I’m glad that members were able to add their great voices.” 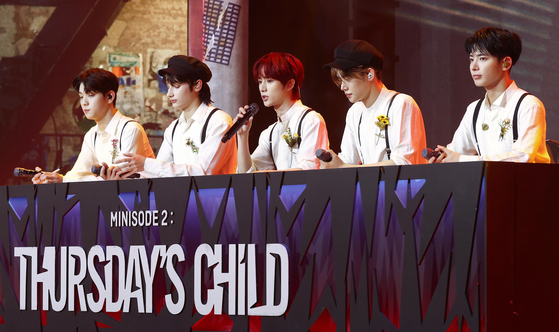 Tomorrow X Together sat down to discuss its new EP. [NEWS1]


The EP is also the first time for the boy band to work in units. Yeonjun and Hueningkai joined forces for “Lonely Boy” and Beomgyu and Taehyun came together for “Thursday’s Child Has Far To Go.”

“'Thursday’s Child Has Far To Go’ was inspired by the nursery rhyme ‘Mother Goose,’” said Soobin, “and the popular TikTok hashtag ‘break up glow up.'”

“It’s about the heartbroken boy trying to overcome a breakup,” he continued. “After showing the boy’s strong, complex emotions in the first four tracks, we thought it’s a good final track that makes you smile and reminds you to keep growing.” 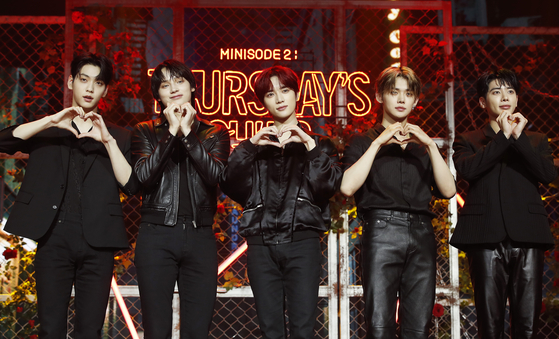 
“We thought ‘far to go’ had an ambiguous meaning,” Taehyun said. “There’s a long way to go after a breakup, and Tomorrow X Together also has a long way to go from now on. There’s still a lot of sides to us we have to show.’”

The boy band is set to embark on its first world tour, starting on July 2 in Seoul and then touring seven cities in the United States. Although it debuted in 2019 and has released numerous hits — peaking at No. 5 on the Billboard 200 with its most recent second full-length album “The Chaos Chapter: Freeze” in June last year — the band has not yet held an offline concert due to the Covid-19 pandemic.

“We’ve been waiting for this for so long,” said Beomgyu. “We are preparing really hard, and we want to meet as many MOA [Tomorrow X Together fans] in as many cities as possible. We want to give MOA energy, as much as we get it from them.”

Tomorrow X Together breaks its preorder record with fourth EP

[CELEB] Tomorrow X Together shows its darker side in new album