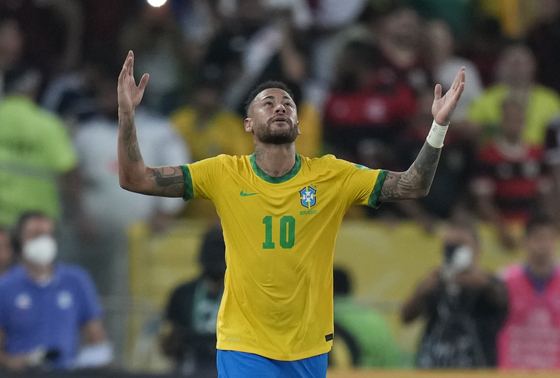 Brazil's Neymar celebrates after scoring his side's opening goal from the penalty spot during a qualifying match for the FIFA World Cup against Chile at Maracana stadium in Rio de Janeiro, Brazil on March 24. [AP/YONHAP]


The Brazilian national football team isn’t pulling any punches when it heads to Korea in June for a tune-up friendly ahead of the 2022 Qatar World Cup, with head coach Tite calling up a formidable lineup dominated by some of the best players in the world.

Brazil will face Korea on June 2 at Seoul World Cup Stadium in western Seoul, before flying to Tokyo to take on Japan on June 6. Tite clearly isn’t underestimating either opponent, calling up almost the exact same squad he took to the final round of World Cup qualifiers in March.

That means that, injuries permitting, Brazil will arrive in Seoul with a squad that includes Paris Saint-Germain’s Neymar, Real Madrid’s Vini Jr and Liverpool’s Fabinho, as well as two of the Premier League's best goalkeepers in Liverpool’s Alisson and Manchester City's Ederson.

The defensive lineup also has its fair share of big names, including PSG’s Marquinhos and Chelsea veteran Thiago Silva, with Fabinho likely to be joined in midfield by Real Madrid’s Casemiro and Manchester United’s Gabriel Jesus also rejoining the squad.

The Brazilian lineup sets up an exciting game for both fans and the Korean squad.

For the fans, the June 2 game offers a chance to see the world’s No. 1 football team in action here in Seoul, likely with the majority of their most famous players on the pitch.

For the Korean squad it also serves as an important chance for the players to test their mettle against a formidable opponent.

Many of the Korean players will have faced members of the Brazilian squad before — almost the entire team plays for various European clubs where the likes of Tottenham Hotspur’s Son Heung-min, Wolverhampton Wanderers’ Hwang Hee-chan and Bordeaux’s Hwang Ui-jo will have crossed their paths — but there are some big names who rarely, if ever, get to play each other.

Perhaps the most exciting matchup is Tottenham’s Son and PSG’s Neymar, two of European club football’s most clinical attackers. Seeing them on the same pitch will be a treat for football fans, although whether they’ll actually have much opportunity to interact remains to be seen.

Korea will host friendlies against Brazil on June 2, Chile on June 6 and Paraguay on June 10.

Korea will play another friendly on June 14, but the opponent for that fourth match has yet to be determined.