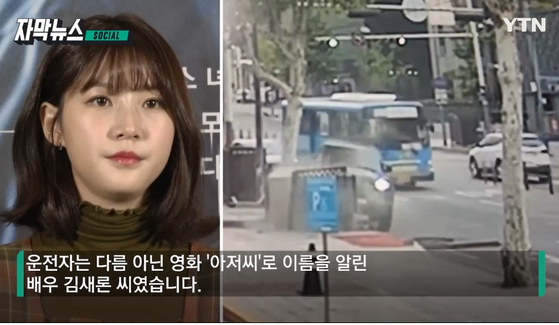 Actor Kim Sae-ron, left, and the CCTV footage of her SUV crashing into an electric transformer in Cheongdam-dong, southern Seoul, on May 18. [YTN]


The blood test results of actor Kim Sae-ron, who was caught driving under the influence on May 18, were released Wednesday, resulting in the suspension of her license.

After failing the breathalyzer test when she was caught, Kim requested a blood alcohol test. The police had said it may take a couple of weeks to get the test results.

The Seoul Gangnam Police Station revealed Wednesday the results that showed Kim’s blood alcohol level on the day she was caught driving under the influence exceeded 0.08 percent, which makes her subject to permanent suspension of her driver’s license. The police added that the case will now be brought to the prosecutors' office to investigate Kim and the passenger whom she was with.

Kim’s agency Gold Metalist told JTBC on Wednesday that Kim is currently working out how to compensate for the damages she had caused, such as those to KEPCO for damaging the electric transformer, to the business owners who could not operate their businesses in the morning due to no electricity and to the district office for the damaged lamp posts and guard rails.

On the morning of May 18, Kim was reported to have damaged more than three lampposts and several guard rails while driving under the influence in Cheongdam-dong of Gangnam District, southern Seoul. The car also crashed into an electric transformer, cutting off electricity in nearby cafes. The police caught Kim after receiving multiple reports of a vehicle “swaying precariously.” A couple days after the incident, Kim posted a handwritten apology on her Instagram account, admitting to wild drunk driving.

The 22-year-old actor dropped out of the upcoming SBS drama series “Trolley,” while Netflix Korea announced that Kim will be deleted from the upcoming series, “Hunting Dogs.”