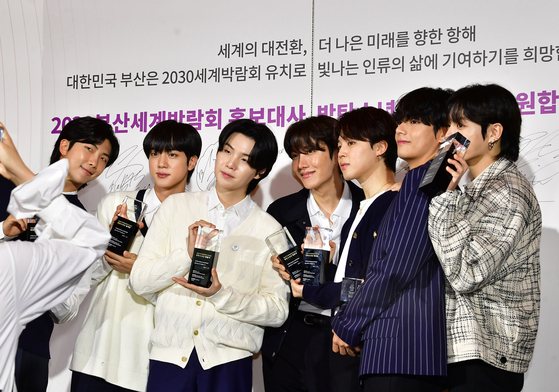 BTS members pose in front of cameras after being appointed as ambassadors for Busan’s bid to host the World Expo 2030 on July 18 at their agency HYBE in Yongsan District, central Seoul. [NEWS1]


HYBE released an official statement on Thursday related to controversies surrounding BTS’s free concert in Busan to promote the city’s bid to host the World Expo in 2030.

BTS, as an honorary ambassador for the World Expo 2030 bid, is scheduled to hold a free concert titled “BTS: Yet to Come in Busan” at the Busan Asiad Main Stadium on Oct. 15. Despite the band’s good intentions, however, some fans have criticized the city and the government for the lack of funding, forcing HYBE to shoulder the full financial responsibility for the concert, which is estimated to cost over 7 billion won ($5 million).

HYBE announced on Thursday that they “are not prioritizing expense, [but merely] participating in the concert to contribute to the nation and society” in hopes of winning the bid for the World Expo.

“BTS is staging this concert without a fee,” the agency clarified. “We are only trying to host the event based on the artists’ determination to give a free concert for the fans.”

The agency said that it will make up for the concert’s cost through sponsorships, advertisements from online streaming and other subsidiary enterprises.

“We are fully aware that with the government’s budget alone it will be difficult to sufficiently cover the event’s expense, and we have always been prudent about receiving government support as we know that [the budget’s] source derives from our citizen’s taxes.

“The government and the city are doing their best to support us within their limited budget,” HYBE continued. “We do not think that it is proper to exhaust resources from the government, the city or the companies who are working hard to win the bid for the 2030 World Expo.”

HYBE emphasized that the agency and BTS pride themselves in contributing to the country, and that they are not “giving up the stage quality just because it is a state-led event.”

“Through the concert, we hope to put Busan at the center of global spotlight,” HYBE said.

The agency anticipates that approximately 60,000 concertgoers will attend the event, and more than 10 million viewers on its livestreaming.

Initially, the concert was expected to draw 100,000 fans to a makeshift seaside stage in the city’s Gijang County. However, the location was changed to Busan Asiad Main Stadium for better transportation and safety of the masses.

Busan's not-so-smooth bid to convince BTS to be ambassador

Acclaimed actor, K-pop superstars and hopeful residents all get behind Busan