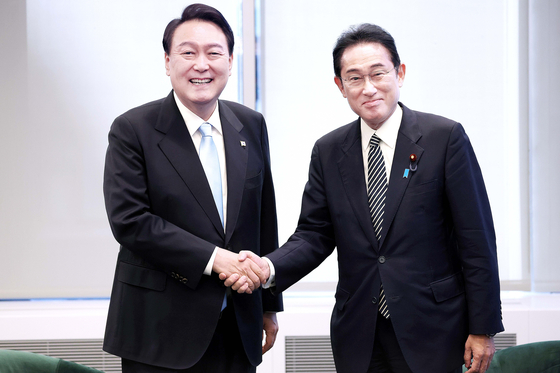 
Korean President Yoon Suk-yeol had brief meetings with the leaders of Japan and the United States in New York on Wednesday, not the formal summits initially envisioned by Seoul.

Yoon and Japanese Prime Minister Fumio Kishida held an "informal" meeting for 30 minutes on the sidelines of the of the 77th session of the UN General Assembly, according to Yoon's presidential office, and agreed on the need to improve relations between the neighbors.

This was Yoon's first one-on-one sit-down meeting with Kishida since his inauguration in May, though the two leaders had several encounters in late June, including a trilateral summit with the United States, at the NATO summit in Madrid.

"The two leaders shared the need to improve bilateral relations by resolving pending issues and, to this end, they agreed to continue consultations and instructed diplomatic authorities to accelerate dialogue between them," said Lee Jae-myoung, deputy presidential spokesperson, in a statement.

The statement didn't refer to the issue of compensation for forced labor victims during World War II, a sticky issue between the two countries that was brought up during their foreign ministers' talks in New York on Monday.

The two leaders shared "serious concerns" about North Korea's nuclear program, including Pyongyang's recent enactment of a law allowing the use of pre-emptive nuclear strikes earlier this month and the possibility of a seventh nuclear test. They agreed to work closely with the international community.

Yoon and Kishida agreed to "cooperate with the international community in order to uphold universal values shared by both countries, such as liberal democracy, human rights and the rule of law," said the presidential office. They agreed to "continue communication" between the two leaders.

The talks took place on the sidelines of a Friends of the CTBT event hosted by Kishida to increase support for the Comprehensive Nuclear Test Ban Treaty (CTBT), an event not attended by Yoon.

The presidential office announced last week that Yoon was expected to hold bilateral summits with Kishida and U.S. President Joe Biden on his New York trip.

Kishida reportedly was displeased at Korea's unilateral announcement of a summit without proper coordination between the two countries.

Japanese officials referred to the Yoon-Kishida meeting as "talks," while Korea described it as "summit," though both sides agreed that they were "informal."

The two leaders' opening remarks during their meeting were not described to the media, as would usually have be the case for a summit, and the presidential press corps was kept in the dark about the exact format until the last minute.

In a press briefing on Thursday in Tokyo, Japanese Chief Cabinet Secretary Hirokazu Matsuno said that the talks "were not formal," and that Seoul shared the same view.

The Japanese Foreign Ministry said in a statement that the two leaders shared the need to restore a "sound bilateral relationship with the resolution of various issues" and that the two countries are "important neighbors for each other under the current strategic environment."

"What is most important is that there was an agreement to continue communication between the leaders and to speed up the dialogue between diplomatic authorities," said a Korean presidential official. "A first step was taken to achieve tangible results. Despite the fact that there are many disputes between Korea and Japan, it is meaningful that the two countries' leaders met after two years and 10 months and took the first step toward a solution."

The last Korea-Japan summit was between President Moon Jae-in and the late Japanese Prime Minister Shinzo Abe in December 2019 in Chengdu, China, on the sidelines of a trilateral meeting with the Chinese premier.

Tokyo has insisted on Seoul coming up with a solution to the forced labor issue after strongly protesting Korean top court rulings in late 2018 ordering Japanese companies to individually compensate victims. Time is running out for a diplomatic solution before final procedures to liquidate the assets of Japanese companies in Korea, as they have refused to comply with the court rulings.

Japan argues that a 1965 bilateral treaty that normalized bilateral relations resolved all compensation issues related to its 1910-45 colonial rule. 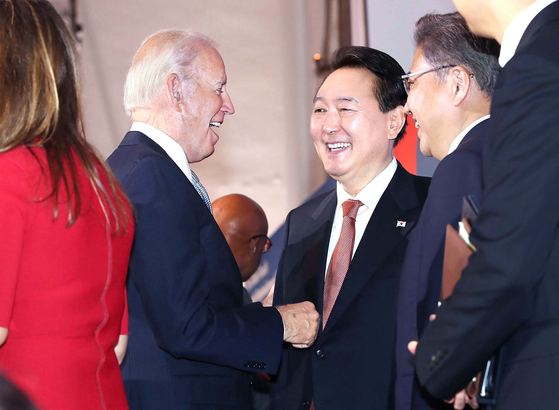 Yoon saw another hiccup when his planned bilateral summit with U.S. President Joe Biden was reduced to a 48-second conversation on the sidelines of a fundraising event for fighting infectious diseases later Wednesday afternoon.

Though not initially on the attendee list, Yoon was invited at the last minute to the Global Fund's Seventh Replenishment Conference hosted by Biden, according to a presidential official.

Yoon gave a short speech at the event and pledged $100 million to the global fund over three years as a part of efforts to fight H.I.V., tuberculosis and malaria and strengthen the global health system.

During his speech at the event, Biden mentioned South Korea among countries that made significant pledges to the fund. The event was also attended by the leaders of France, Canada and Japan and Microsoft founder Bill Gates.

Despite the brevity of their talks, Yoon asked Biden to resolve Korea's concerns over the U.S.'s Inflation Reduction Act (IRA), which doesn't allow tax credits for electric vehicles assembled outside North America, according to his presidential office.

Biden was said to have replied that he is well aware of Seoul's concerns and said that the two sides will continue to have discussions.

The presidential office noted progress in consultations between Seoul and Washington on extended deterrence, and agreed to "further strengthen cooperation between the two countries to deter North Korean aggressions and come up with a coordinated response to North Korean provocations."

Seoul had been anticipating a second Korea-U.S. summit on the sidelines of the General Assembly, which would have been an occasion to follow up on Yoon and Biden's first summit in May and also tackle in more depth issues such as the IRA.

A presidential official said that Biden's schedule in New York had been reduced due to his attendance of Queen Elizabeth II's funeral in London on Monday and other domestic obligations.

"The total amount of time the two leaders met is not important," a senior presidential official told reporters Thursday in New York, saying that a "Plan B" was taken because of Biden's changed schedule.

Presidential officials said that the two sides were also able to touch on the issue of a currency swap deal between the two countries.

Yoon met Biden on three occasions during his second overseas trip. They had a brief conversation at a reception hosted by King Charles III in London on Sunday, ahead of the queen's funeral.

Later Wednesday after the fundraiser event, Yoon and first lady Kim Keon-hee attended a reception hosted for foreign dignitaries by the U.S. president and first lady Jill Biden at the American Museum of Natural History.

The White House in a statement said that Yoon and Biden in their meeting "reaffirmed their commitment to strengthen the U.S.-ROK [Republic of Korea] alliance and ensure close cooperation to address the threat posed by the Democratic People's Republic of Korea (DPRK)."

Biden arrived in New York Tuesday and unlike Yoon's UN address, mentioned North Korea directly in his speech to the General Assembly on Wednesday.

"Despite our efforts to begin serious and sustained diplomacy, the Democratic People's Republic of Korea continues to blatantly violate UN sanctions," said Biden. 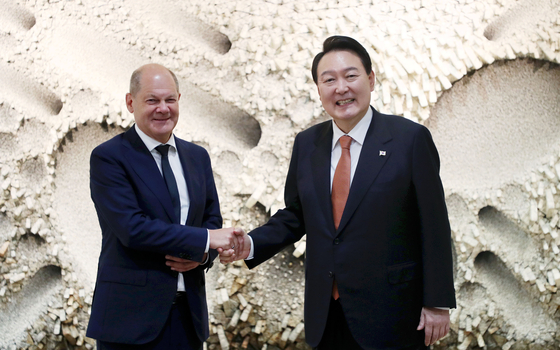 Also on Thursday, Yoon held his first summit with German Chancellor Olaf Scholz and agreed to work to deepen their countries' bilateral relationship and cooperate on economic security issues, including global supply chains. The two countries mark the 140th anniversary of diplomatic relations next year.

Yoon later took part in the Digital Vision Forum at New York University and spoke on the theme of "Solidarity for the Freedom of Digital Citizens."

He also met with Korean-American scientists and attended a dinner event hosted by Michael Bloomberg, a global ambassador for the UN Race to Zero and Race to Resilience campaigns.

In Seoul, Yoon's failure to hold summits with Kishida and Biden came in for blistering criticism.

The liberal Democratic Party (DP) labeled the trip a "diplomatic disaster" and described the truncated meeting with Kishida as "humiliating."

DP lawmakers also criticized Yoon for not being able to pay respects to Queen Elizabeth II at Westminster Hall on Sunday due to London traffic congestion. The presidential office later said they had coordinated all their actions with the royal family, and Yoon was able to sign a condolence book before he left London on Monday.

Park Hong-keun, the DP floor leader, said during a policy coordination meeting at the National Assembly Thursday that Yoon's "empty-handed and rude diplomacy" has "greatly undermined the dignity of the Republic of Korea."

Yoon was recorded on video speaking to his foreign minister and national security adviser while exiting the fundraiser event, saying, "If those [expletives] do not pass it in the [U.S.] Congress, Biden will lose face." He apparently was referring to Biden's ambitious pledge to contribute another $6 billion to the Global Fund in cooperation with Congress.

A presidential official said Thursday that the remarks were made in "private" and that it was "very inappropriate to link private remarks to diplomatic achievements."

Lawmakers from the People Power Party (PPP) tried to put a positive spin on the trip, saying it was meaningful that the first Korea-Japan meeting was held in two years and nine months, accusing the DP of undermining Yoon's diplomatic achievements.

"Although it is possible to criticize the diplomatic performance of the president, the head of state, from the standpoint of the opposing party, a minimum amount of dignity and courtesy must be maintained," said Chung Jin-suk, interim leader of the PPP.

On Thursday, Yoon was set to depart for Canada, the last leg of a seven-day three-country tour that concludes Saturday. The trip includes a visit to Toronto Thursday to meet with artificial intelligence experts and Korean residents and a summit with Canadian Prime Minister Justin Trudeau in Ottawa on Friday. 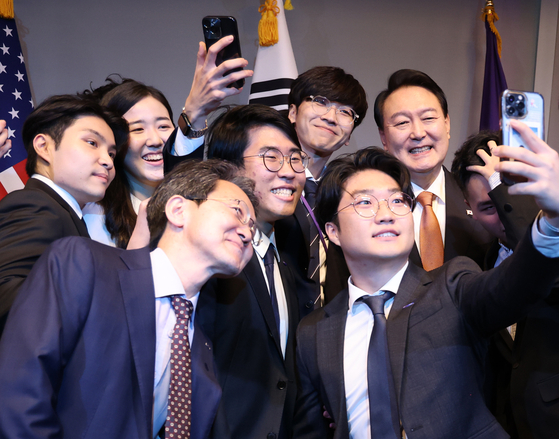 Possibility of Yoon-Biden summit in May arises