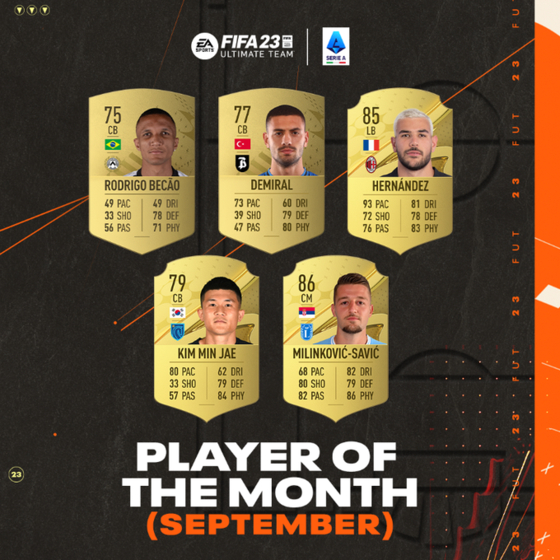 An image posted on the official Serie A Twitter page shows the nominees for EA Sports Player of the Month. [SCREEN CAPTURE]


Napoli center-back Kim Min-jae was nominated for EA Sports Player of the Month on Wednesday, just five weeks after he made his debut in the Italian Serie A.

Kim was one of five players to get the nod for the September Player of the Month, alongside Rodrigo Becao of Udinese, Merih Demiral of Atalanta, Theo Hernandez of AC Milan and Sergej Milinkovic-Savic of Lazio.

Players were nominated for their performance over Serie A games five to seven, which saw Napoli take on Lazio, Spezia and AC Milan. During that spell, Kim not only provided some solid defense but also scored his second goal in a Napoli shirt.

Napoli, who are yet to lose a game this season, beat Lazio 2-1 on Sept. 3, with Kim heading in the opening goal in the 38th minute. The Naples side then took down Spezia 1-0 a week later, although Kim was rested for that game, before edging out reigning champions AC Milan 2-1 on Sunday.

During that last game, Kim lunged across the box for a phenomenal 96th-minute block that stopped Milan from tying the score and left fans speechless. That single piece of defending made headlines, particularly because legendary Italian defender Paolo Maldini, now Milan’s technical director, was caught on camera staring on in shock as Kim celebrated as if he’d just scored a hat-trick.

Kim joined Napoli in July from Turkish club Fenerbahce after one year playing in the Super Lig. According to reports, Kim is under contract with Napoli until 2025, with the club retaining the option to extend the deal for two more years. Napoli paid 19.5 million euros ($20 million) to Fenerbahce to trigger Kim’s release clause, and have included a 45-million-euro release clause in his new contract.

Since arriving in Naples, Kim has played the full 90 minutes in eight of Napoli’s nine games so far this season.

Across all those games, Kim and the Napoli defensive line have only conceded six goals, five in league games and one against Liverpool. Not only has Kim pulled his weight in defense, he has also scored two Serie A goals so far this season, against Monza on Aug. 21 and Lazio.

Kim is only the third Korean ever to play in the Italian league, but his career is already off to a stronger start than either of his predecessors — Ahn Jung-hwan and Lee Seung-woo.

Voting for the September EA Sports Player of the Month will be open until Sunday.

Kim Min-jae Napoli Serie A Player of the Month