Korean victims in Nepal crash were father and son

Korean victims in Nepal crash were father and son 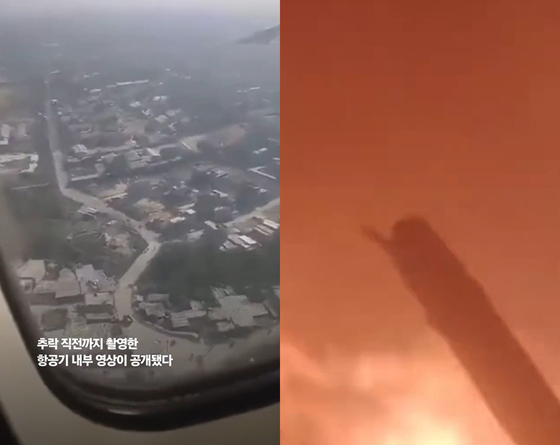 Screen captures of a video estimated to have been filmed by a passenger on his phone during the flight from Kathmandu to Pokhara on Sunday that crashed and killed all passengers. [SCREEN CAPTURE]

The two Koreans on board a plane that crashed in Nepal on Sunday were a father and a son surnamed Yu, according to flight records and local reports.

The body of the father, a man in his 40s, was identified by the Nepali police on Monday afternoon, according to a Yonhap report. The Foreign Ministry affirmed later Monday that a Korean consular officer dispatched to Gandaki Medical College hospital in Pokhara was able to identify two bodies "estimated to be of the Korean nationals."

There were 72 on board the Yeti Airlines flight that crashed in Pokhara on Sunday, including four crew members. A total of 68 bodies were recovered as of Monday afternoon, according to local reports. Not all bodies were identified as of press time Monday.

According to reports in Nepal, Yu was traveling in Nepal with his teenage son during the son’s winter break.

The duo was said to have last communicated with family members via a messenger app before boarding the flight from Kathmandu to Pokhara. 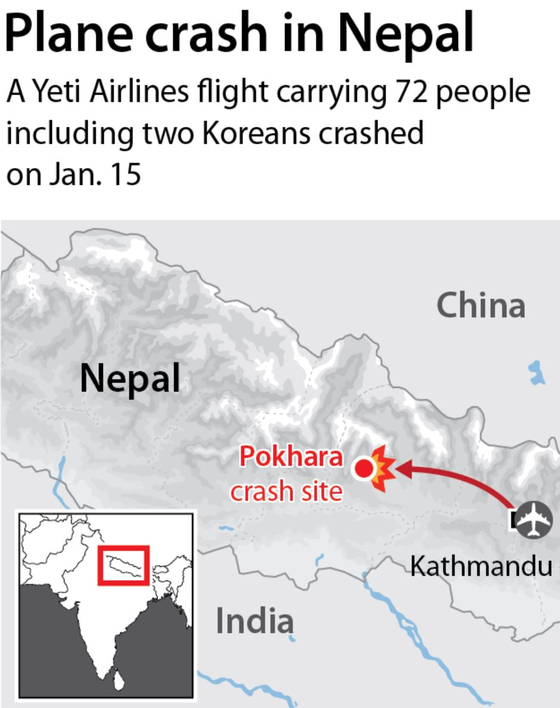 Foreign Minister Park Jin, currently on a presidential trip to the United Arab Emirates, spoke with Korean Ambassador to Nepal Park Chong-Suk over the phone Sunday night and ordered a 24-hour emergency response. The ministry also set up an emergency response team under the second vice foreign minister.

On Monday, the ministry said it's communicating with the relatives of Yu and his son to share updates on the search efforts. It couldn't confirm as of press time Monday if relatives were traveling to Nepal to pick up their remains.

Nepali authorities Monday morning had recommenced the search at the crash site near the airport in Pokhara, 80 miles west of Kathmandu, a common destination for Everest climbers.

The ATR 72 plane was flying from Kathmandu to Pokhara Sunday at around 10:30 a.m. and was reportedly in the air for at least 18 minutes before it crashed for reasons not yet known.

Part of the wreck was reported to be on a hill near the Seti River Gorge, with some parts fallen into the gorge.

Of the 72 people on board, all 68 passengers were confirmed dead as of Monday, according to Yeti Airlines spokesman Sudarshan Bartaula, who spoke with several media outlets including the CNN and Reuters.

Other outlets such as TASS cited another spokesperson for the airlines to report there were no survivors.

Of the 68 passengers, 15 were foreign nationals and the rest Nepalis, according to the Civil Aviation Authority of Nepal. 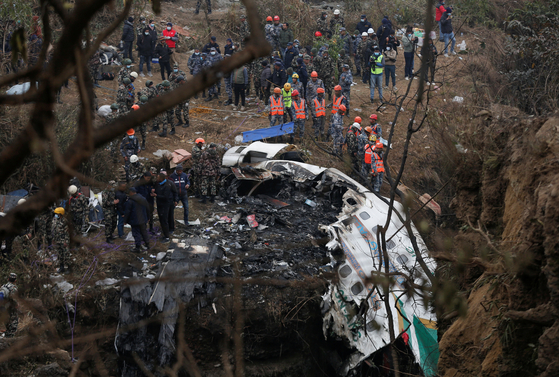 A rescue team works to recover the body of a victim from the site of the plane crash of a Yeti Airlines operated aircraft, in Pokhara, Nepal on Monday. [REUTERS/YONHAP]


The crash on Sunday was the third deadliest recorded in Nepal, according to the Aviation Safety Network.

Nepal, home to a part of the Himalayas and eight of 14 mountains whose peaks are higher than 8,000 meters (26,247 feet), has had at least 16 other flight accidents in the past 10 years due to sudden changes in the weather or difficult-to-approach airstrips in the mountains.

Its last plane crash was last May, when a plane operated by Tara Air flying from Pokhara to Jomsom crashed, killing all 22 aboard.

2 Koreans were on plane that crashed in Nepal

Leaving on a jet plane

Leaving on a jet plane