The man who is making Korea bubble

The man who is making Korea bubble 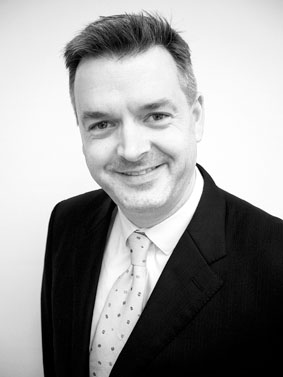 [IN-DEPTH INTERVIEW]James Paton is a natural host. With an easy smile and quintessentially British humor, he can glide into any party and engage guests in lighthearted conversation.

No one seems to mind that his real purpose at any soiree is to promote and sell the Moet Hennessy brands in Korea. When the president of Moet Hennessy Korea is working, he is a fixture at the city’s best events. When at leisure, he can often be found cooking for friends, at home in Gahoi-dong, northern Seoul.
He speaks about business as if it were pleasure and treats his pleasure like business. It’s natural for this British man to be seen sipping a flute of Champagne with the city’s stylish neo-aristocrats. But then he pursues extreme sports ― from free-diving to triathlons to motorcycling ― with the fierce ambition of a chief executive.
Mr. Patton turned 42 on Jan. 8. A world citizen, he attributes his nomadic proclivity to his love of travel. After all, he’s been away from his hometown of Reading, near London, since he was 18. He even admits he has almost lost his British accent.
Moet Hennessy Korea is a fully-owned subsidiary of Moet Hennessy Louis Vuitton, which imports, markets and distributes the group’s prestigious Champagnes, spirits and New World Brands. Mr. Patton has just renewed his three-year contract with Moet Hennessy. The IHT-JoongAng Daily spoke with him about his accomplishments in Korea at his office in Seocho-dong where he works with 50 local staff:

Q. When you go to a new territory, how do you approach the market?
A. I’m not sure about the history of Korea, but [before we go into the market] normally there would have been an agent. The Champagne market has been very small, primarily just Dom Perignon and Moet & Chandon. In Korea, there are the main international brand owners such as Moet Hennessy, Pernod Ricard, Maximum, and Baccardi & Martini, and there are about 200 more importers in the country. Some importers use agents for some of their brands. Generally we identify the places and type of venues for promotion, and our marketing guys are part of that scene. These marketers don’t have to be serious drinkers but they must be passionate about the product they distribute.

Is Korea a lucrative market?
Spirits have a large market in bars, while wine is big in restaurants and hotels. Margin is quite high at the moment for imported wines, and distribution is very fragmented. Market structure [in Korea] is quite complicated. One of our competitors uses more than 2,200 wholesalers, for example, while we use 109. But, we don’t need that kind of number. Rather, we focus on the quality of our consumers. For example, we don’t plant Veuve Clicquot everywhere.

How do you go about marketing your products?
Much of the initial work involves building quality distribution, ensuring that outlets for distribution support the image of the product. Generally anywhere you will see Veuve Clicquot, for example, we won’t widen the distribution until we have the right scale going. And brand building is well-supported by our central marketing from headquarters. We get a large amount of support from the maison, which provides us with well-prepared visual materials, product presentation, packaging, instruction, visual images and guidance to keep products and their image consistent. You won’t get that from some of the smaller brands.

How complicated was brand building for you when you came to Korea?
It all depends. A lot of our Champagne brands are nascent here. Sales volume, estimated in 2006, reports only 13,000 cases of Champagne in Korea, of which we claim 86 percent. Compared with Japan, it is much, much smaller. But, it’s an interesting market. One of the key growth factors is the emancipation of female consumers. Wine culture is providing a sophisticated environment for young women consumers to go out and drink and socialize. That helped fuel the recent Champagne boom.
We’re quite fortunate that it’s starting to happen now in Korea. We have also been successful in Korea in terms of editorials and product placement, especially in fashion and lifestyle magazines.
There tends to be an increasing amount of coverage of Champagne, which contributes to the growth of the market and culture. I see that more and more consumers are interested in a lifestyle that incorporates Champagne.

How do you implement local elements into the strategy?
In terms of strategic direction, we’re an international brand, so we market [our products] appropriately. We wouldn’t Koreanize the strategy, but we would incorporate different Korean elements in our events. For every Dom Perignon dinner, Korean artists performed. A Korean photographer, Kim Mi-hyun, took photos for a Dom Perignon global campaign.

What’s your plan for this year?
I’ve renewed my contract to stay another three years. In my first term, I put a lot of good work into establishing Champagne. From now on it is imperative that we build the single malt whiskey brand, Glenmorangie, for the Korean market. It has a great potential for the Korean market. Korea is one of the biggest markets in the world. The country is reported to have consumed 2.3 million nine-liter cases of spirits last year. It’s a huge market. This is where we see potential for Glenmorangie. Korean consumers are discerning and used to drinking premium whiskey aged between 15 and 30 years. With malt whiskey, we’re able to take that another stage further by offering a single distillery. It’s like wine from the chateaus of Bordeaux.

How did your journey to Asia begin?
My first job out of college was at a banana and lychee plantation in South Africa. I was a farm foreman, in charge of 200 workers on the farm. It was a temporary job.
I always wanted to come to Asia. I came back to England from Africa with the intention of getting a job in Hong Kong. I felt the relaxed mood of Cape Town wasn’t the place for me. I got a job in Hong Kong from London, at Jardine, one of the original opium trading houses. While there, I oversaw the joint venture company with Moet Hennessy and later moved to the leader of luxury brands. So it was a logical move. The position in Korea became mine because of my expertise in understanding the Asian market.