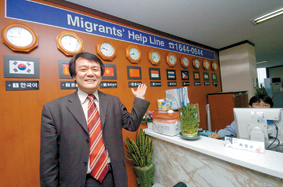 Workers from Vietnam, Bangladesh and Thailand now have a hotline in Korea exclusively designed to solve their problems. Since opening its lines in December, the Migrant Workers Center in Korea has fielded 2,630 calls from foreign workers. Workers who call will be able to speak their native language.
“The biggest problem in working in a different country is language,” said Kim Hae-sung in an interview with the JoongAng Daily. Mr. Kim is president of the Migrant Workers Center in Korea.


The center launched the helpline so foreigners could discuss issues like unpaid salaries, immigration problems, compensation for work-related injuries, finding apartments, funerals or abuse at the hands of employers. There are currently 12 volunteers from Russia, Mongolia, Sri Lanka, Pakistan, Indonesia and Thailand. The service is provided in 12 languages; Chinese, Mongolian, Thai, Vietnamese, Urdu, Russian, Indonesian, Tagalog, Sri Lankan and Uzbekistan, as well as Korean and English.
“We are planning to expand the number of languages ,” said Mr. Kim.
The counseling hours are between 9 a.m. and 6 p.m. On the weekend the hours are between 1 and 7 p.m. The center is closed on Monday. When the calls can’t be answered callers can leave their number on a machine and they will be contacted.
Mr. Kim said for each call, a computer file is created that logs callers’ names and the questions they ask. Having a record “makes it easier for us to understand or see the history of the worker’s problem,” Mr. Kim said.
Korean experts in labor law and related issues sit next to those answering phones to provide fast and reliable information.
“There are many services for those who speak English, Japanese or Chinese but rarely anything for other Asian countries,” Mr. Kim said.
“Although many people think English is the most common language in the world, more people speak Chinese,” Mr. Kim said. “Some workers from South East Asian countries speak awkward English.”
Mr. Kim said the service has produced an unexpected result. The phones have always been busy but now migrant workers are not the only ones calling. Calls are now coming in from Korean employers.
“This we did not see it coming,” Mr. Kim said. “Since the employers have trouble talking to the workers they often call us to translate into their employee’s mother tongue.”
Mr. Kim said the translations employers most often ask for concern safety problems, health issues and cautionary measures to take on delicate jobs. They even ask translators to explain to workers why they have not been paid.
“In the past, even when workers faced harsh conditions and were being abused, they had nowhere to turn. Since many were illegal residents, they were afraid that they might get deported,” Mr. Kim said.
He said since then regulations have changed to provide more security for migrant workers. The center was established two years ago by the Ministry of Labor. It is estimated by the ministry that there are 400,000 legal migrant workers in Korea, as of last year. The government estimates that there are 200,000 illegal migrant workers.
In addition to the phone service, the center provides newsletters in 11 different languages, an online service that not only gives the latest news in Korea but also details events in the workers’ homelands.
Korean classes are provided on and offline at the center. Computer classes are also available.