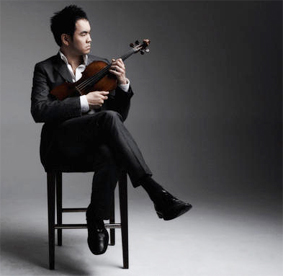 Last Tuesday hundreds of classical music fans gathered at the Rodin Gallery in central Seoul to watch a performance by the violist Richard Yongjae O’Neill, 29. The one-hour invitation-only concert was a way to thank his fans for the success of his nationwide tour last year and for the sales of his double platinum album, “Lachrymae.” There were only a limited number of chairs in the lobby of the gallery but those who had to stand seemed transfixed by the passion O’Neill expressed during the concert.


He performed mostly pieces from his new album, his second. He was accompanied by pianist Lee Yoon-soo and guitarist Kim Tack-jin. These pieces were written for the viola or for other stringed instruments and orchestra or vocal pieces that go well with the viola.
Asked how he feels about the album’s success, he said, “I’m flattered and honored. People received the album so well.”
The album has sold 35,000 copies since its release in September 2006. Shortly after the album’s release, he gave a sold-out concert at Seoul Arts Center. In the same year, he became one of the very few violists ever to be awarded the prestigious Avery Fisher Career Grant as well as a 2006 Grammy Nomination.
His professional relationship with Korea began in 2001 when he was asked to perform before Julliard Professor Kang Hyo, the art director of Sejong Soloists. Soon O’Neill accepted Mr. Kang’s invitation to join the chamber orchestra.
The story of O’Neill and his mother was featured on local television in May 2004 and it touched many people. The violist’s Korean born mother was adopted at age five and raised in Oregon. In August 2004, O’Neill performed in front of his mother at the Great Mountains Music Festival.
“I am proud of my Korean heritage,” he said. “It was wonderful that my mother was able to visit Korea for the first time in 46 years.”
For his short-term plans, he said, he is going to take a vacation on an island away from his busy schedule.
O’Neill also said he is going to start recording his third album although he did not give any details. He also plans to perform with several major European orchestras this year.
O’Neill’s next performance in Korea is scheduled for March in an atrium located on the ground floor of the Posco headquarters in southern Seoul. The event is an invitation-only performance.