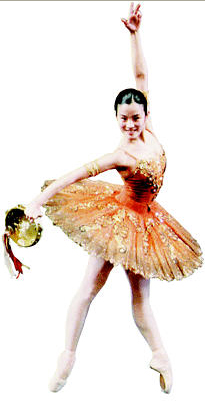 Ballerina Ha Eun-ji during a performance. By Kim Seong-ryong

The 2007 World Ballet Star Festival arrives at Seoul Arts Center this week. It is a stage for the leading ballet dancers of the world to show off. There will be performers from superlative companies including the Bolshoi, Kirov, Russian and Paris Opera ballet companies.


New to the event this year is Ha Eun-ji, 23, a member of Universal Ballet. She has been widely recognized for her excellent performances. Critics have described her as being “as flexible as an octopus” although she has yet to be chosen as a principal dancer.
She will be appearing at this year’s festival because Daniil Simkin, 20, of the Vienna State Opera Ballet strongly requested that she partner up with him in Korea.
“Daniil Simkin has his own style of working with a local ballerina in different countries whenever he performs at Gala shows around the world,” said Ms. Ha. “I have met him several times at international competitions for the last five years. Since it is happening in Korea, he naturally thought of me.”
Maybe I’m the only Korean ballerina he knows,” she said with a laugh.
Ms. Ha is a charming new star. When talking, she speaks slowly. She often bursts into laughter. She is straightforward, open and frank. In other words she does not fit the stereotype of a ballerina in any way. She could never be described as a princess from an affluent family who had no hardships growing up.
She distinguished herself from others even when she was young. She was admitted into the Korean National University of Arts when she was only a freshman at Seoul Arts High School. Asked whether she has a dancer in her family, she said, “My father runs a shoe factory and my mom is a housewife. If I have to pick a relative with talents there’s my great aunt’s son, he was a vocalist,” she added.
She began dancing by instinct. “When I was about four or five, I used to follow the rhythm and dance to music whenever a tune reached my ears, especially ballads,” Ms. Ha said. “I was interested from a young age in peaceful music rather than modern dance music. Maybe that explains why I was a born to be a ballerina.”
She took her first step toward becoming a ballerina by entering a ballet school run by the Korea National Ballet when she was in her fifth year.
After entering the Korean National University of Arts, she took part in various competitions and won prizes, beginning with the Jackson International Ballet Competition. She won gold medals in a series of international ballet competitions including the Luxembourg and Prague International Ballet Competition. She also won the Dong-A Dance Competition. In 2003, she was invited to join the Nevada Ballet Theater but after four months with the company she fell down stairs and the ligament in her right knee ruptured.
“In the past, I felt that ballet was difficult. But after that injury, I feared that I could never dance ever again. Because of that I felt more committed. I realized that I could not live without ballet, it was my reason for living,” she said. After one year of rehabilitation, she joined Universal Ballet.
One of her best-known repertoires is in “Esmeralda.” She must kick her right leg high in the air at great speed while holding a tambourine in her right hand. She succeeded in performing the movement over 10 times in a recent series to the amazement of spectators.
“Technique is not that important. I have to approach the dance with all my heart, that’s what makes the difference. I went through great pain and I know what it means to be have heart,” Ms. Ha said.