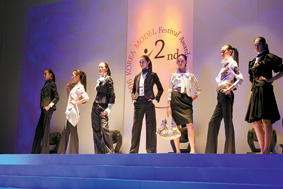 The second Korea Model Festival Award in the Marriott Hotel last Friday. Provided by the organizer

It’s the year of the Golden Pig and the future for Korean modeling couldn’t look brighter. At the annual Korea Model Festival Award last Friday, some 800 industry professionals and VIPs attended an invitation-only event where they could envy top dollar models like Song Kyung-ah and Choi Ji-ho. Both are blessed with fine genes and, quite naturally, pursued a career in modeling. 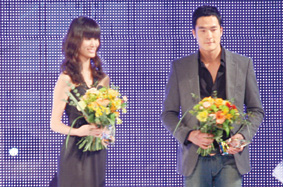 
Less than a decade ago, these photogenic style icons, who are pushing 30, might have been worried about an uncertain future. Not today. As the award ceremony proceeded, it looked like they would need to hire a management company to extend their celebrity status beyond Korea.
The fashion festival at the Millennium Hall of the Marriott Hotel in southern Seoul lasted for a gruelling five hours and included a sit-down dinner, five fashion shows and perfunctory award ceremonies. With stiff businessmen and politicians handing out awards, emphasizing the importance of hallyu ― the Korean cultural wave ― the event was more like a celebrity-based TV show than a serious fashion event epitomized by glamorous gowns and jewels. More importantly, the interest shown by Korea’s leading politicians, such as Seoul mayor Oh Se-hoon and Won hee-ryong of the Grand National Party, demonstrated that the Korean modeling industry has experienced a seismic shift in its profile.
Behind this earthquake is Yang Eui-sig, who took the helm of the 5000-member Korea Model Association two years ago. “Before the market opened in 1988, modeling in Korea was not considered a “real” job. When the advertising industry exploded along with the economic boom, the local modeling industry boomed as well. Overnight, a model earned 10 times more,” said Mr. Yang, who started modeling in 1984. But the Korean fashion industry crashed along with the country’s economy during the IMF crisis of the late 1990s. 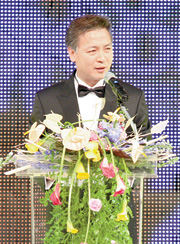 Yang Eui-sig, the president of the Korea Model Association.


But now, especially as the “appearance fees” of Korean celebrities have skyrocketed, often unjustifiably, Mr Yang says there will be a bigger role for Korean models.
Mr. Yang now teaches “model studies” at a local college and believes Korean models have great potential in the Asian market, now that Korean actors have drawn attention to Korea and its culture via hallyu. For this second Korea Model Festival, he invited two leading representatives from China and Japan. He hopes they can help facilitate his grand plan ― to bring China, Japan and Korea together to hold an Asia Model Festival next year.
“In Asia, we may speak different languages but we Chinese, Korean and Japanese are almost indistinguishable in our faces. So unlike actors, models have an advantage because their job is to use body language,” Mr. Yang said, adding that by opening up the entire Asian market, Korean models can become internationally successful. Shinji Kobayashi, the chairman of the Japan Model Agency Association, and Yao Ge, the director of the China Professional Fashion Models Committee, flew into Seoul with the same goal in mind. For the event, they brought 10 top models each. To emphasize the spirit of international collaboration, the festival awarded two top models from China and Japan with membership in the Korea Model Association.
The Chinese representative said their industry adopted the tough French system when it founded the association in 2000. “There are about 10,000 members, but they are the ones that passed screenings,” Mr. Yao said.
Chinese and Japanese representatives said that China and Japan had collaborated for the past year and when they co-organized a modeling contest in China last year they included Korean contestants, but it was done locally through an agent and not through the association. 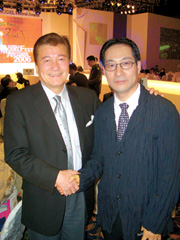 
Mr. Yao said that through the new association with Korea, he plans to invite Korean models to China’s fashion events to celebrate the lunar New Year.
“I’m very happy that all three leading countries in Asia came together, and I hope to see a unified China-Japan-Korea model festival next time,” Mr. Kobayashi said. He added that Japan has the longest history of modeling and, at 20,000, the largest number of registered models in Asia. “Two model agency associations came together 14 years ago, but we’ve had associations for more than 40 years.”
Mr. Kobayashi was concerned about the way models find jobs in Korea. It is still common here for models to submit composite photos to multiple agencies. “If the deal involves big-budget advertising, this practice works against ethics,” Mr. Kobayashi said, recalling that Japan used such a practice 20 years ago.
Korea’s “It” model, Song Kyung-ah, who belongs to the Esteem agency, thinks otherwise and says the local modeling industry has already changed. Although old school casting still exists, more models prefer to work exclusively with their trusted agents, who give them appropriate exposure. Ms. Song, in particular, has expanded beyond runway work. She has also appeared in trendy commercials and hosted a popular reality TV show.


“For me, will be a huge honor to work more often in the future with Chinese and Japanese models I became friends with in New York and Paris. I look forward to the future of the pan-Asian fashion world,” said the 28-year-old model, before strutting up to the spotlight to receive the 2007 Best Fashion Model Award.