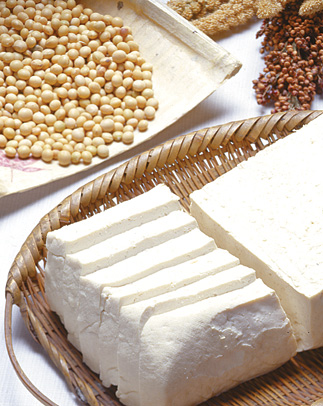 Soybeans are the only plant-based food that provides all eight essential amino acids. [JoongAng Ilbo]

The Australian New South Wales Cancer Council says that excessive consumption of soy supplements can stimulate the growth of existing tumors in patients suffering from breast or prostate cancer.
This argument has confused many consumers who enjoy soy-based products as it contradicts the widely-held belief that soy beans are healthy.
The Cancer Council’s nutritionist Kathy Chapman advises patients suffering from breast cancer or those who have suffered from the disease in the past to be cautious when using soy products or plant-based estrogen in their diet, since, according to the research, soy not only increases the risk that tumors will grow, but it could also lower the effectiveness of anticancer agents.
According to the Cancer Council, the chemical structure of isoflavon ― a protein inside the soy bean ― is similar to that of estrogen. Estrogen is believed to stimulate or cause breast cancer.
Kang Yoon-koo, a doctor at the Asan Medical Center, said the Cancer Council’s argument should not be accepted without further research, as their arguments have not been published in any influential medical journal. Dr. Kang is calling for further verification of the theory.
Kim Kyung-soo, a doctor at Kangnam St. Mary’s Hospital, said it has been quite some time since such an argument has been advanced. “It’s the same as the belief that estrogen consumption by women during menopause increases their chance of getting breast cancer to a degree that’s relatively higher than women who do not take estrogen.”
Doctor Kim said the US Food and Drug Administration has argued it is hard to conclude that excessive consumption of soy product increases the possibility of breast cancer for women in menopause.
The Korean doctors say Japan considers isoflavon in beans to be a leading anticancer substance.
Additionally, in Japan, soy products are recommended for treating breast cancer, prostate cancer and intestinal cancer. Isoflavon is believed to block toxic oxygen and suppress tyrosine kinase, a substance that causes cancer. During the body’s metabolism of atmospheric oxygen, toxic oxygen is produced continuously in the body by the formation of by-products. These toxic elements include hydrogen peroxide, superoxide and hypochlorite.
Once formed, toxic oxygen can damage various parts of the body, such as the membranes that form the boundaries of every cell. The isoflavones and protein in soy provide antioxidants, which are compounds that neutralize free radicals ― the toxic, oxygen based molecules that damage cell membranes and DNA.
Korean doctors who defend soy say the fact that Asian women from China, Japan and Korea have a breast cancer rate that’s four times less then women living in the United States supports the theory that soy products help prevent some forms of cancer.
Women in Japan on average consume 29.5 grams of soy products everyday while in the United States women’s daily consumption of soy products averages 0.9 grams.
The dietary fiber in soy products is also believed to act as a anticancer substance.
The fiber helps cancer causing products within consumed food to quickly pass through the intestines.
The trypsin in soy, which is known to act as an emetic, is also believed to contain anticancer agents and help ameliorate the effects of diabetes.
The US Food and Drug Administration has officially recognized that soy’s isoflavones decrease the risk of heart attack and stroke. Foods in the U.S. that contain at least 6.25 grams of soy per serving may state “Diets low in saturated fat and cholesterol that include 25 grains of soy protein per day may reduce the risk of heart disease.”
A key fact about soy is that it is nature’s only plant source of complete protein. A complete protein provides all eight of the essential amino acids that foods must supply because the human body cannot make them itself.
Like meat and dairy products, soy furnishes the full protein profile ― but with a difference.
Unlike meat and dairy, soy is extremely low in cholesterol and fat, the artery-clogging causes of heart disease. Plus, soy products are high in fiber and vitamin B6. And soybeans’ protein makes up almost 40 per cent of their total calories.
Korean doctors say the proper way to consume soy products is to take an appropriate amount every day. To increase the anticancer qualities of the soy, people should consume seaweed and pumpkin, which have similar anti-oxidant properties.
There are 13,000 varieties of beans. In Korea yellow and black as well as green beans are the ones most frequently enjoyed.
Although these types may look different they all have the same nutritional qualities.
The biggest problem is that since the outer shell is hard, most people cannot digest soybeans unless they have been ground into powder or made into tofu.