Speaking for others is interpretor’s valuable skill

Speaking for others is interpretor’s valuable skill 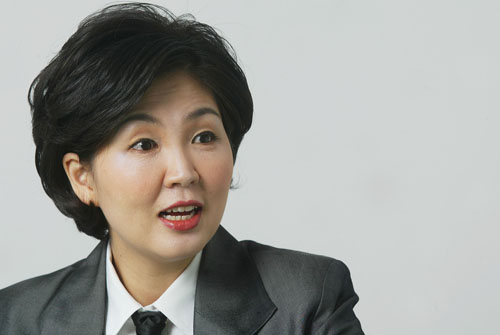 Kim Hye-rim is a celebrity ― among interpreters. She acted as the interpreter for former President Kim Dae-jung’s press briefings at international conferences and the Tripartite Environment Ministers Meeting (TEMM) between South Korea, China and Japan. Ms. Kim is also a Chinese Literature professor at the Korea National Open University.
Ms. Kim says her most difficult job was providing interpretation service for former Chinese Premier Zhu Rongji. “If an interpreter doesn’t keep track of the conversation, Premier Zhu Rongji converts his words immediately into English.”
In 2000, when Premier Zhu visited Samsung Electronics’ Suwon plant, the interpretation was delayed due to loud noise coming out of the machines. Mr. Zhu began giving an impromptu speech in fluent English. “All of a sudden, I had goose bumps. I concentrated my attention and almost screamed while I was interpreting, just to beat the noise coming from the machines.”
Ms. Kim is a veteran interpreter. She has done over 700 Korean-Chinese interpretations in the last18 years. But she always gets nervous when she finds herself with a microphone in her hand and an audience waiting to hear her translation. “Ning Fukui, the Chinese ambassador to Korea, who speaks fluent Korean, converts his words into Korean if the translation has a slightly different nuance.” This means an interpreter can never relax.
Ms. Kim said every Chinese dignitary has his own style of conversation. “Former Chinese Premier Li Peng constantly smiles during the conversation while evading delicate issues. And former Chinese ambassador Zhang Ting Yan had a way of using circumlocution like an eel.” China’s vice foreign minister, Wu Dawei, often speaks Japanese, making use of his experience as a Chinese diplomat to Japan. This is why Mr. Wu is not very popular among Korean-Chinese interpreters.
An interpreter like Ms. Kim with 18 years of experience is likely to have had some excruciating moments during her career. Ms. Kim said she can never forget an international conference that was hosted by South Korea, China and Japan’s newspaper companies. “The representative of the People’s Daily was suddenly using terms that are mentioned in the “Book of Changes,” such as the ‘Eight Trigrams for Divination’ and ‘Yin-Yang and the Five Elements.’ I found out that to us Koreans, these terms are regarded as divination terms but for the Chinese, they are used in everyday life.”
Ms. Kim recently published “Kim Hye-rim’s Chinese Translation and Interpretation Dictionary,” based on her 18 years of interpreting experience and know-how. The dictionary even includes information on topics such as public administration, education, religion and energy, which cannot be found in existing dictionaries.
The terms that are introduced in the dictionary were selected from the 20 note pads that she has filled with notes while interpreting. The most practical terms were selected and published.
Ms. Kim studied Chinese for the first time when she majored in Chinese literature at Ehwa Womans University. She says daily practice, at least for 20 minutes, is essential for beginners. Ms. Kim said beginners should listen and speak Chinese as often as possible if they want to learn the language quickly.
Ms. Kim’s book is timely. Her speciality, translating Chinese, now attracts the highest salaries in the profession.
“Cast away the prejudice that Chinese is a foreign language. Make goals that are easy to achieve. It will give you a sense of achievement and soon you will enjoy studying Chinese,” she said.