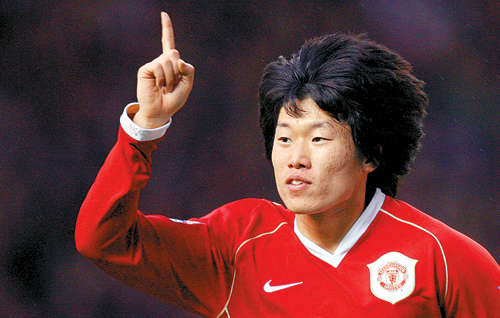 Park Ji-sung of Manchester United in the English Premier League says he has had to work hard on both his physical conditioning and his English, which he admits is “terrible.” [YONHAP]

There are four Korean soccer players in the English Premier League and only one of them is single: Park Ji-sung of Manchester United. If he were in Korea for the Lunar New Year holiday, Park might have gotten an earful from relatives about whether he was dating anyone or when he wanted to get married.
JES, which provides articles for media outlets in Korea, met Park on Valentine’s Day in London for an interview and ― playing the role of the irritating relatives ― asked him that question.
“The earlier the better, I guess. If I meet someone who I think is right for me, then I would like to get married right away,” he said.
But when he isn’t thinking of his soul mate, what does Park, who turns 26 Sunday, do?

On off-days
A day off for Park is rather quiet. He gets up at 8 a.m. for breakfast, and then starts training at 9:30. He returns home for lunch around 1 or 2 p.m. Then he takes English lessons, and winds down by surfing the Web or playing computer games.
He doesn’t get out much. Park said he doesn’t know one hot downtown spot. Two teammates, Patrice Evra and Edwin van der Sar, are neighbors who give him some company occasionally.
Park left home eight years ago and said loneliness is still his biggest enemy.
“There are times when I miss my friends so much I just want to board the next flight home,” Park said.

On marriage
When asked whether he’s waiting for the age of 30 to get married, Park said he was not. So just what kind of woman would he want?
“Given my profession, I would want someone who is patient enough to understand the things that come with living with a soccer player,” he said.

On his English proficiency
Over his career, Park has played in Japan, the Netherlands and now in England. So how are his language skills?
“Well, I was never good at Dutch to begin with, and now I’ve forgotten what little I knew,” he said with a laugh. “I’ve forgotten some Japanese as well, but I can communicate a little.”
Since signing on with Manchester United in 2005, he has been taking one-on-one English lessons two or three times a week. A British-Korean is his teacher. She now doubles as Park’s personal manager.
“My English is terrible,” Park said. “I think I am just not that smart.”
In the past, he would take a nap after morning practice, but today, he said he studies English during those off hours.
“For the last two or three years, I haven’t taken many naps. I don’t want to waste my time,” he said. “I’d rather study English or read books.”

On his endurance
One of Park’s nicknames is “Three Lung Park,” thanks to his almost unmatched stamina on the pitch. Was he born with such endurance?
He said he was only average in stamina early on, and had to work hard to improve his conditioning.
“I am a smallish guy, so I lift weights quite a bit,” said Park, who is listed at 178 centimeters (5-foot-10) and 72 kilograms (159 pounds).

On his choice of alcoholic beverage
Park is more than a social drinker, except during the season. He rarely goes out then, although he’ll occasionally drink a glass of wine or soju with his dad, Seong-jong.
But during the offseason, Park said he enjoys male bonding over alcohol as much as anyone.
“Once back in Korea during the offseason, soju, whiskey, you name it, I drink it,” he said, before adding he isn’t particularly fond of boilermakers.

On his financial management
Once the topic of money came up, Park seemed almost embarrassed, and wondered whether it is something people in Korea are interested in.
“I guess no one would believe it if I said I haven’t made a lot of money,” Park said sheepishly. He is earning 2.8 million pounds ($5.5 million) this season. “But my parents, especially my dad, handle my income. I just focus on playing.”

On his training as a young player
For a player of his caliber, Park’s first touch [a soccer term that refers to a player’s ball handling skills upon receiving a pass] is mediocre. When asked what he would like to change from the training he received as a child, Park was adamant that he would “change everything.”
“It is a huge minus for me that I hadn’t trained on grass field before,” he said. “And whereas youth leagues here focus on nurturing individual skills, Korean youth soccer is all about winning.”
He admitted his teammates like Ryan Giggs, Paul Scholes and Gary Neville, who all grew up in the English youth program, make him “jealous every time I see them play” because of their individual talents.
“It would be great for Korean youth soccer to simply copy everything in the European system, but that might be difficult to do,” Park said. “It’s important to study what top soccer nations do with their young players, and model ourselves after them to improve our own system.”