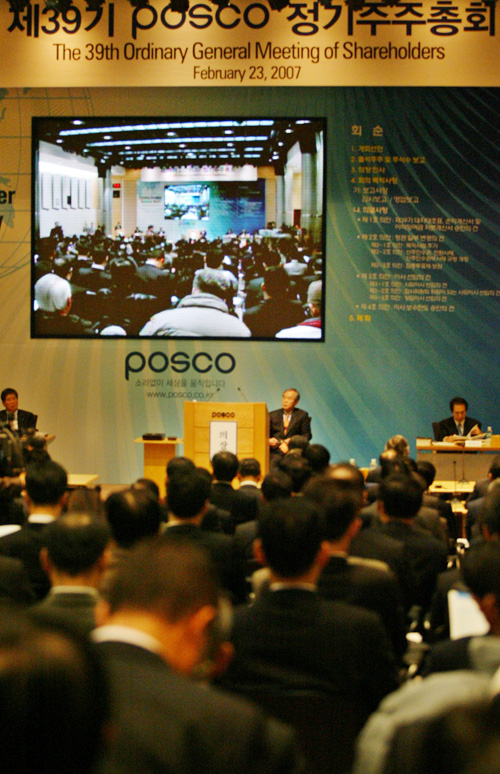 At the Posco shareholder meeting in Seoul yesterday, the company took steps to avoid a hostile takeover attempt. [NEWSIS]

Posco, the world’s third-largest steelmaker, won shareholders’ approval to ease rules restricting its ability to sell shares, strengthening the Korean company’s defenses against any hostile takeover attempt.
Strategic partners will be allowed to buy new stock issued by Posco after shareholders agreed to the change at the Pohang-based steelmaker’s annual meeting yesterday. Posco will also be able to sell as much as 2 trillion won ($2 billion) of bonds convertible into stock, double the earlier ceiling.
The changes may help Posco, the cheapest stock among Asia’s four largest steelmakers relative to book value, turn to partners to repel unsolicited takeovers.
Nippon Steel Corp. and Posco last year agreed to increase stakes in each other to ward off hostile takeovers amid industry consolidation. Mittal Steel Co. bought Arcelor SA last year for $38.3 billion and Tata Steel agreed to buy Corus Group for $12 billion in January.
“Posco seems to be preparing for any possible takeover threats,” said Lee Eun-Young, an analyst at Mirae Asset Securities Co. in Singapore. “There are more consolidations to come in the industry.”
Shares of steelmakers surged last year as Mittal fueled speculation of further acquisitions in the industry. Shares of Nippon Steel, the world’s second-largest steelmaker, jumped 63 percent during 2006 and Posco’s stock climbed 53 percent.
Posco Chief Executive Officer Lee Ku-Taek said Posco would consider mergers and acquisitions with other companies.
Posco shares are trading at record highs and the stock’s been the biggest contributor to the Korean Kospi stock index, which hit record highs the last two days.
The stock’s still cheap relative to its peers. Posco shares trade at 1.3 times the company’s book value, or the amount by which assets exceed liabilities, according to CLSA Asia-Pacific Markets.
That’s cheaper than the 2.5 times for Nippon Steel, the 2.4 times for Japan’s JFE Steel Corp., and the 1.8 times for top Chinese producer Baosteel Group Corp., according to CLSA.
“There’s a $10 billion difference between Posco and Nippon Steel’s market value as of yesterday’s close,” said Mr. Lee.
“Since our capacity is similar, there is no reason why there should be a difference. Our stock should be much higher than its current level.”
Posco is the second-biggest stock on the benchmark Kospi index by value.
Posco’s Mr. Lee, 60, extended his term for three more years yesterday.
He reiterated that the company needs to boost its market value to avoid becoming a target.
Posco counts Korea’s National Pension Service as its biggest shareholder with a 2.86 percent stake.